Last year, I did not see a coin with a 2008 date until April. Even with the Federal Reserve giving priority to circulating 50 State Quarters during their first two weeks of issue, it was a while before I found one in change. I wondered how long it would take to find a 2009 coin in my pocket. This year, the wait lasted until January 13.

On Tuesday, January 13, I attended the meeting of Montgomery County Coin Club, where I was inaugurated as president for my second term. Our treasurer works near the US Mint’s headquarters. He used his lunch break to visit the headquarters to purchase a number of the Hawaii quarters and the new Native American $1 Coin from the change machines in the building’s lobby.

Before the meeting started, I handed our treasurer a $1 Federal Reserve Note and he handed me a $1 coin. With the coin in my pocket, I can proclaim receiving a 2009 in change! Ok… it may be cheating, but it is still a 2009 coin and it did not cost me more than face value to obtain it. 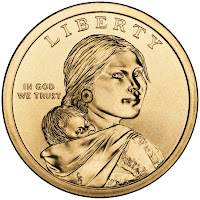 This was the first time I saw the design rather than the line drawing. The obverse of the coin continues to have the Glenna Goodacre designed portrait of Sacagawea, the Shoshone Indian guide for Meriwether Lewis and William Clark, carrying her infant son, Jean Baptist. The only difference between the previous versions and the new obverse is that the date and mint mark were moved to the edge along with E Pluribus Unum and 13 stars.

For 2009, the Native American $1 Coin Act (Public Law 110-82 [text] [pdf]) required the redesign of the reverse to honor Native Americans and the important contributions made by Indian Tribes and individual Native Americans in United States history. This year, the design represents the “Three Sisters Agriculture,” 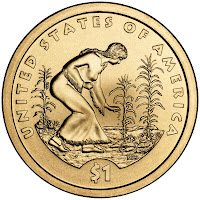 “Three Sisters” agriculture is the practice of growing corn, beans, and squash in the same mound enhanced the productivity of each plant. This simple concept lead to the accepted practice of crop rotation that is used today to maintain the production in modern farms. This helped Native American produce food and sell their knowledge to the early European colonists to ensure their survival.

In hand, it is an excellent design. The details of the image is simple, yet complete that gives the coin a great look. Even the change in the font used for “United States of America” near the edge enhances give the coin the feel of Native American art work. US Mint Sculpture-Engraver Norman E. Nemeth should be commended for his wonderful work.