The MegaPenny Project was originally created by someone identified as “kokogiak media.” Its purpose was to visualize large number of items. In this case, the author took the lowly Lincoln Cent and show what many of them would look like as the pile built up as compared to common items.

The original MegaPenny Project website disappeared. Since it was very cool, I had to find a copy. After finding it on the Internet Archives, I downloaded the pages and redesigned their interface.

Visualizing huge numbers can be very difficult. People regularly talk about millions of miles, billions of bytes, or trillions of dollars, yet it’s still hard to grasp just how much a “billion” really is. The MegaPenny Project aims to help by taking one small everyday item, the U.S. penny, and building on that to answer the question: “What would a billion (or a trillion) pennies look like?”

The display on the right has tables at the bottom, listing things such as the value of the pennies, size of the pile, weight, and area (if laid flat). All weights and measurements are U.S. standards, not metric.

One penny. Most people in North America have seen them and you probably have one in your pocket right now.

Using this small metal disk, with a size and weight familiar to almost everyone, go to the next slide to see how it can grow.

Every journey begins with a single step. So, to get to big numbers, you have to start small. Lay them out and you have an inch. 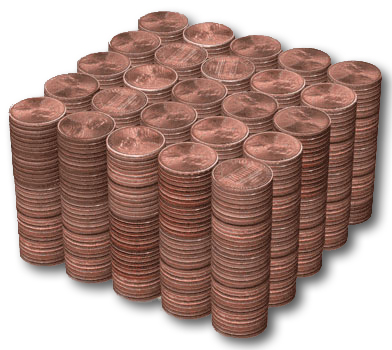 A thousand pennies is only $10.00 worth of pennies, yet it weighs over six pounds. Now let’s put together a cubic foot made of these copper (3%) and zinc (97%) coins.

Three hundred pounds of pennies. Remember the stack of 16 pennies? It was one inch tall. Well, take 12 of those and stack them and you’ll have a one-foot-tall stack. The cube above is made up of 256 of those one-foot stacks, making one cubic foot of pennies. Remember this cube, since it will be the building block for all upcoming penny-structures you see on these pages. Now let’s double it. 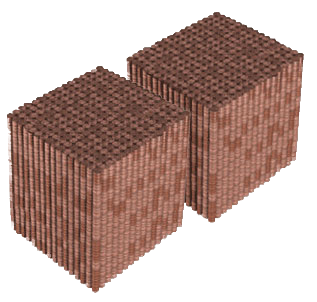 Doubling our 50,000 pennies to 100,000, we now have two one-foot cubes. Given, this wasn’t a big jump, but now we’re going to start climbing the numerical ladder by powers of ten. Ever wonder what a million pennies would look like? 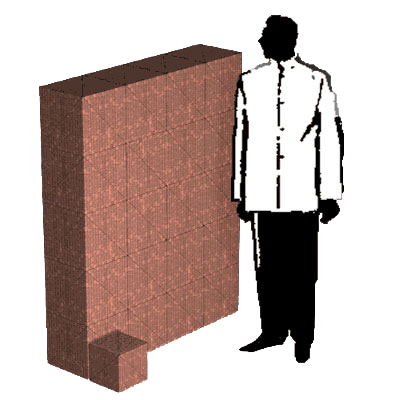 1,003,776
One million, three thousand, seven hundred and seventy-six Pennies
A wall five by four by one feet thick with a 9-inch cube stepstool

Say hello to our friend Graham. Now that the pennies have really begun to pile up, he’ll be standing in for scale. Graham is about 5 feet, 10 inches tall, and he weighs about 180 pounds or about 35 times less than the 1 million pennies stacked beside him. Next step, Ten million. 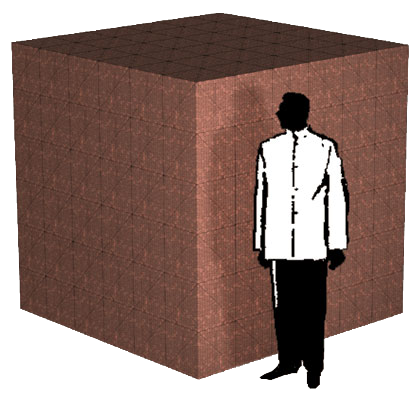 Ten Million cents. If you laid these all out flat, side-by-side, like a huge carpet of pennies, it would nearly cover one acre. The next slide has a look at 100,000,000 copper disks. 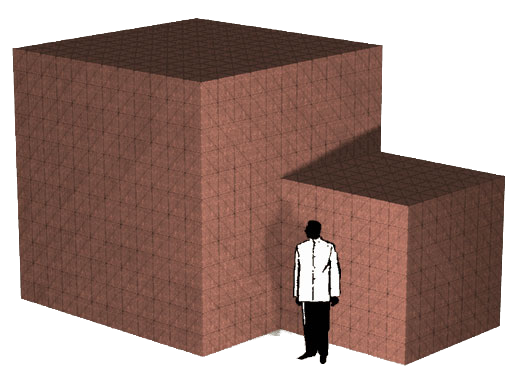 Since these cubes are mostly dense metal, their weight is impressive. One hundred million pennies weighs over 300 tons. For comparison, the largest living animal, the Blue Whale, weighs less than 150 tons as an adult.

When you hear talk of “billion” of something (dollars, miles, people, etc), it’s hard to visualize. But up next, we have a visual for you — one billion pennies.

Each of these blocks represents one 9x11x41 foot school bus – as seen below. If you were to stack all these pennies in a single pile, one atop the other, the stack would reach nearly one thousand miles high. For comparison, note that the Space Shuttle typically orbits only 225 miles above the Earth’s surface.

Only in North America and the general scientific community is this number (1,000,000,000) called a “billion.” Most European countries call this number either “one thousand million” or, in some cases, a “milliard.” Enough international confusion, let’s move on to ten billion. 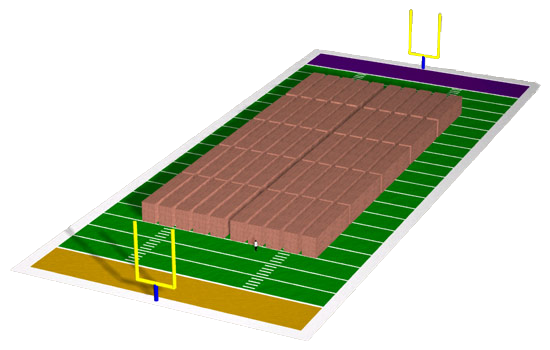 Current estimates place the world’s population at six billion people. The pile of pennies above would then be nearly enough for two pennies for every person on Earth. The U.S.Mint currently manufactures about this many pennies every year.

In the image above, Graham and his ten billion coins are now standing on a standard U.S. football field (360 x 160 feet) for further scale. Next up, the hundred-billion cube. 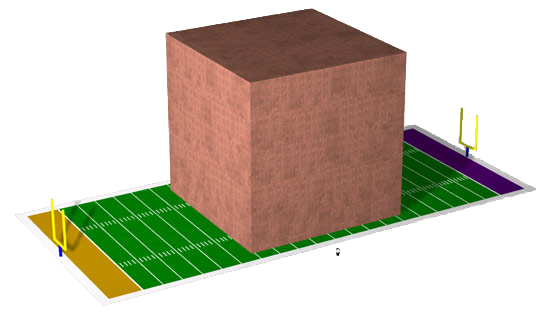 If you took these hundred billion pennies and laid them out like a carpet, you could cover 14 square miles. Compare that to Manhattan Island, which measures 22 square miles.

The cube you see above is made up of over 4.1 million stacks of 24,330 pennies. Now, we are getting close to the limits of existing pennies. How many pennies do you think are currently in circulation? 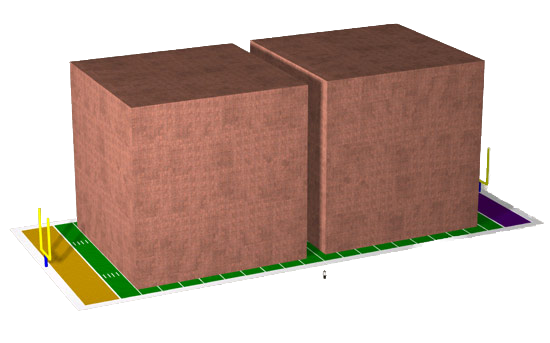 Current estimates by the U.S. Mint place the number of pennies in circulation at around 140 billion. Others have estimated as many as 200 billion currently circulating. Since the first penny was minted in 1787, until present-day, over 300 billion pennies have been minted in the United States. So that leaves about 100 billion pennies that have been retired by the Mint, lost down sewer drains, stored in jars, smashed by trains, or collected by numismatists in the past 200 years.

Now that we have reached the limits of what actually exists, let’s move beyond, and into the Trillions. 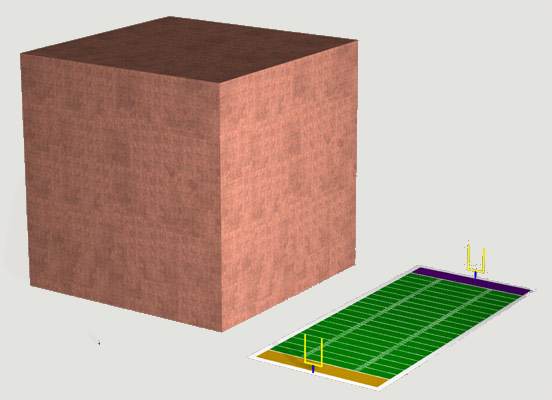 The same football field as the last two pages, set beside our new cube for scale. Notice our friend Graham, still barely visible as a speck at lower left.

Let’s look at this new cube a little more closely to get a better idea of its size. →