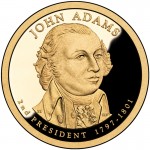 A is for Adams, John Adams, our second president. He was our first vice president and the only president elected from the Federalist Party. Adams is currently being honored on his first coin as part of the Presidential $1 Coin Program. The Adams dollar coin has seen fewer errors than the Washington predecessor, but the reports of errors have been reduced.

B is for Brooks, as in Robinson, Hall of Fame third baseman for the Baltimore Orioles. The defender of the hot corner at Memorial Stadium for Earl Weaver’s O’s will appear at the Whitman Baltimore Coin on Currency Convention. Robinson will be at the Baltimore Convention Center on Friday, June 29 from 2 PM to 5 PM giving out 100 Adams Dollars to Young Numismatists attending the show. Robinson will also be providing autographs to other attendees. I wonder if I can get him to autograph an Adams Dollar?

C is for coins. Lots of coins. Three halls of coins! I have been a regular attendee of this show for the last six years and I still am amazed and overwhelmed when I enter the hall. I have made a made a few friends with some dealers. I hope to see them at this show. It is just fun, and that is what collecting should be about.