I am not a big fan of the Olympics. There are certain sports that intrigue me, but the drama of these games have drawn me in. Whether it is Michael Phelps, Dara Torrez, the beach volleyball teams, or even the running of Ussain “Lightning” Bolt, I found these games intriguing. I do understand the political aspects of the games and the comparison that I and others have to the 1936 Berlin Olympics, but that is not why I am writing today. 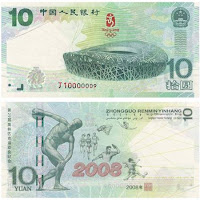 Numismatically, the 2008 Beijing Olympics has produced interesting collectibles. One collectible many have missed is a 10 Yuan note with an image of the The National Stadium, nicknamed the Bird’s Nest, rather than the traditional image of Chairman Mao Tse-tung. The reverse has the primary image of a discus thrower and smaller vignettes of other activities.

These are nice options for currency collectors and collectors of Olympics commemoratives.

10 Yuan Note from Reuters/China Daily
HK$20 note from China Daily
Click on the image to enlarge.