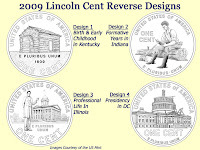 The US Mint held a ceremony at the Lincoln Memorial Reflecting Pool to unveil the four new reverse designs for the 2009 Lincoln Cent.

The four reverse designs were part of the Presidential $1 Coin Act of 2005 (Public Law 109-145 [GPO: TEXT, PDF]) to celebrate the Abraham Lincoln Bicentennial. The law calls for four reverse designs to honor Lincoln’s birth and early childhood in Kentucky, his formative years in Indiana, his professional life in Illinois, and his presidency in Washington, DC.

The obverse of the coin will continue to have the portrait of Abraham Lincoln that was designed by Victor David Brenner and first released in 1909.

New coin designs will be release quarterly with the Early Childhood reverse being released on February 12, 2009.