Is It Really That Bad? 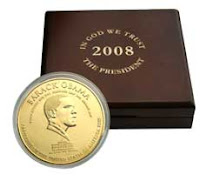 Winston Elizabeth & Windsor, a company from Birmingham, UK, has struck a limited edition Barack Obama commemorative medal (most stories mistakenly call this a coin) proclaiming Sen. Obama the next president.

The company sold 300 limited edition silver medals to the Democratic Party to hand out to members of the campaign. It was reported that the contract was worth £100,000 (approximately $198,500).

WEW is planning on striking more of these medals if Obama is elected president in silver, gold, and platinum. The company is expecting a big windfall from this venture.

While I find the concept of an Obama coin amusing, the reaction has been more amusing. From people close to the John McCain campaign to the right wing media, the mock indignation borders on hysterical. It seems that they are angry because the McCain Campaign and the Republican National Committee did not think of this first.

It is not a collectible I would buy, but the bloviating from both sides is funny.