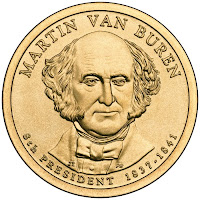 On November 13, the US Mint will release the Martin Van Buren Dollar to honor our eighth president. Van Buren was one of the founders of the modern day Democratic Party. He succeeded Andrew Jackson after serving as Jackson’s vice president.

Van Buren’s presidency was not considered a success after the Panic of 1837 that was caused by Jackson’s refusing to renew the charter of the Second Bank of the United States and withdrew federal funds from then bank. The result was a credit crisis when banks could not access funds and purchase securities to back their deposits.

Van Buren spent the rest of his presidency trying to fix the economy while trying to stay true to Jacksonian Democratic policies, which was not well received. Van Buren refused to expand the treasury, renew the charter for the Bank of the United States. And with slavery being an issue, Van Buren blocked statehood for Texas to prevent the expansion of slave owning states.

Van Buren served one term when he was defeated by the Whig Party candidate William Henry Harrison in 1840.