On the eleventh hour of the eleventh day of the eleventh month in 1918, the war to end all wars ended. It is celebrated around the world as Armistice Day or Remembrance Sunday. In the United States, a law was passed in 1954 to honor all veterans on November 11 of every year.

There will be the usual celebrations around the nation. Ceremonies will be held at Arlington National Cemetery that will culminate with the laying of a wreath at Tomb of the Unknowns 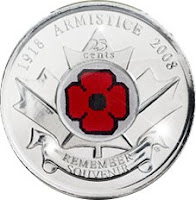 In Canada, the Royal Canadian Mint has reissued the Poppy Circulating Quarter to honor the 90th anniversary of the end of World War I. The poppy became popular in Canada when mentioned in a poem by Canadian Medical Director John McRae in the lime-rich fields of Belgium.

RCM has been distributing these quarters through retail outlets throughout the country along with providing special collectibles on their website. One dollar from the sale of each 2008 Limited Edition Poppy Bookmark will be donated to the Legion’s Dominion Command Poppy Trust Fund, which provides financial aid to Canada’s veterans.

To the veterans of the War to End All Wars and every wars since, thank you for your service to our country!