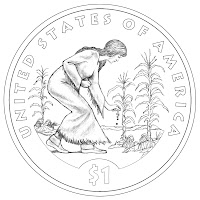 On November 28, Native American Heritage Day, the US Mint announced the design for the reverse of the new 2009 Native American $1 Coin. This design depicts a Native American woman planting seeds in a field of corn, beans and squash, representing the Three Sisters method of planting.

Public Law 110-82 [PDF] was past in September 2007 and signed by the president two weeks later calls for the reverse of the Sacagawea Dollar be redesigned every year to commemorate “of Native Americans and the important contributions made by Indian tribes and individual Native Americans to the development of the United States and the history of the United States.” The obverse will continue to have the Sacagawea design.

The law reduces the percentage of these dollars that have to be struck versus the Presidential $1 coins. This program has no end date.