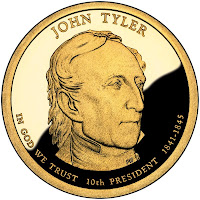 In a ceremony at the Sherwood Forest Plantation home of John Tyler the US Mint released the Presidential Dollar honoring our tenth president. President Tyler was the first to ascend to the presidency from Vice President after the death of William Henry Harrison.

Since Sherwood Forest Plantation is the private home of Tyler descendants, there was no dollar exchange as there was in the past. Only those invited who are under 18 years old were given a single dollar coin.

Nicknamed “His Accidentcy” by his enemies, President Tyler found himself in office during a contentious time. Aside from his accidental presidency, Harrison was selected to run for president by the Whig Party over Henry Clay and Harrison chose Tyler, a former member of the Democrat-Republican party, as his running mate. Clay originally thought that he would be the ”power behind the throne” of the elderly Harrison, but that was thwarted with the younger Tyler becoming president.

Clay was never friendly with Tyler who adapted Democrat-Republican policies from congress. After wrestling with the Whig-controlled congress over banking issues that included the veto of banking measures, the cabinet Tyler inherited from Harrison quit and Tyler was expelled from the Whig Party. Amongst the policies Tyler adopted from the Democrat-Republicans was to oppose the formation of a central bank. This made the Whigs angry and had them suggest that the lack of a central bank lead to the Panic of 1873.

Tyler and the Whigs sparred for most of his presidency. But there were areas where the Tyler and Whigs agreed on policy. Tyler applied the Monroe Doctrine to the Kingdom of Hawaii and used it to begin what became the annexation of the island nation. Tyler normalized relationships with China by sending diplomatic missions and opening a consulate to maintain the relationship. And in 1842, Secretary of State Daniel Webster negotiated the Webster-Ashburton Treaty with Great Britain that set the borders between the United States and Canada.

Tyler risked war with Mexico by annexing the Republic of Texas into the United States. Texas declared its independence from Mexico in 1836. Tyler, who was looking to show his strength in order to be re-elected, sent newly appointed Secretary of State John C. Calhoun to negotiate the annexation. Tyler was convinced that if the United States was able to annex Texas that he would win the support of the Democrat-Republican Party. Texas was annexed but the Democrats became upset and went on to nominate James K. Polk as their presidential candidate.

To run for reelection, Tyler formed his own party from core officeholders in his administration. As an independent and incumbent, Tyler was not as popular as he thought. When the Whigs chose Henry Clay as their candidate, the race became a fierce contest between Tyler and Clay with Polk being ignored. When it looked like he would not win the election, Tyler withdrew and threw his support to Polk. Three days before the end of his term, Tyler singed the bill annexing Texas.

On March 3, 1845, Tyler’s last full day in office, congress overrode a revenue veto, making it the first time that any president’s veto was overridden.

Tyler met his second wife, Julia Gardiner in 1842. Gardiner’s father, David Gardiner, was killed when the steam frigate, U.S.S. Princeton died when a naval gun exploded on the ship while sailing on the Potomac River. Tyler comforted Julia, 30 years his junior, whose subsequent courtship ending with a wedding on June 26, 1844. It was the first time a president was married while in office.

Harrison Tyler is an alumnus of the College of William & Mary, as was his grandfather. Harrison also holds a graduate degree from Virginia Tech University. Harrison is one of the founders of ChemTreat, Inc. a company that claims to be “the nation’s largest independent firm dedicated solely to industrial water treatment.”

Coin image courtesy of the US Mint.