A Commemoration to Enrico Fermi 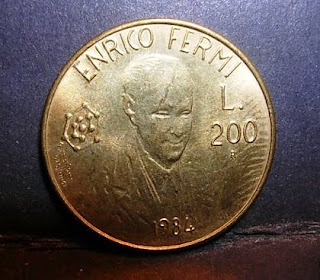 Today, we wish a Happy Birthday to Enrico Fermi. If he was still alive, Fermi would be 108 years old.

Fermi was a Nobel Laureate physicist who is commonly credited with harnessing the nuclear power. Fermi won the Nobel Prize in Physics in 1938 “for his demonstrations of the existence of new radioactive elements produced by neutron irradiation, and for his related discovery of nuclear reactions brought about by slow neutrons” This work made him an important contributor to the Manhattan Project.

In 1984, the Republic of San Marino,the oldest sovereign state and constitutional republic in the world, issued a 200 Lire commemorative coin (KM# 166) honoring Fermi on the 30th anniversary of his death. The coin is made of copper-nickel and is worth about $2.50 as an uncirculated coin.

Happy Birthday, Enrico, and thank you for sharing your work with the world!

Sorry, I forgot where I found the picture to give that person credit.