Adventure Nets A Loonie and Toonie

After a busy few weeks, it was that time. It was time to put the plan into motion.

I check the flight schedules to find the plane was on time. This was good with all of the bad weather in the northeast.

I checked the flight path. The plane was to fly around the bad weather. Again, this is good because it was going to be on time.

I checked the traffic. I wanted to get to the airport on time without having to fight Washington’s infamous traffic.

Everything in place, it was time to go. I handed a treat to the dogs and off I went.

Driving to the airport went smooth except for one construction zone that was not on the list I checked on line. A quick detour allowed me to bypass the backup and coast into National Airport.

Parking was easy and close to the walkway over the road and passed the entrance for the Metro Blue and Yellow lines. Down the elevator and I found a seat near baggage claim.

After a few moments the reason I went to the airport arrived. Standing by the entrance to the baggage claim area was my mother-in-law, who flew from the frozen northeast to surprise her daughter (my wife) for her up coming birthday. We drove back and after a minor glitch in the plan—my wife was home walking the dogs and not in her office—we managed to complete the surprise!

Although my mother-in-law lives in Maine, the rest of their family is from Canada. I have not met them and have only had short conversations on the phone since I do not speak French and their English is limited, they do know I collect coins. One relative sent two different coins that my mother-in-law gave me tonight. 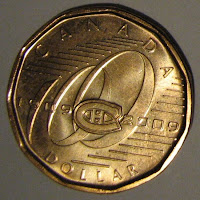 The first is a 2009 Canadian one-dollar coin. Instead of a Loony—the reverse with an image of a common loon—the reverse features a commemorative to the one hundred anniversary of the Montreal Canadiens hockey team. The standard Loonie is an eleven-sided smooth edged coin that is 26.5mm in diameter and made from bronze plated nickel. The 2009 Loonies with the Canadiens Centennial reverse was only circulated in Quebec making it a unique collectible. 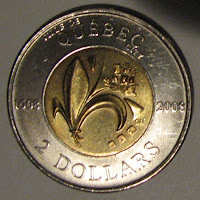 The other coin is a 2008 Canadian two-dollar coin commonly called the Toonie. The Toonie is a 28mm bimetallic coin with an outer ring made from nickel and a brass inner core. Normally, the reverse of the Toonie is a polar bear during the early summer ice flow. This Toonie commemorates the 400th Anniversary of the founding of Quebec City and the first French settlement in North America.

All Canadian coins feature the portrait of Queen Elizabeth II, Queen of Canada.

Surprising my wife and getting two coins for my collections made this a good day.