Be it enacted by the Senate and House of Representatives of the United States of America in Congress assembled, and it is hereby enacted and declared, That for the purpose of a national coinage be, and the same is established; to be situate and carried on at the seat of the government of the United States, for the time being: And that for the well conducting of the business of the said mint, there shall be a Chief Coiner, and Engraver, a Treasurer.

President Washington appointed noted astronomer David Rittenhouse as the Mint’s first director on April 14, 1792. Rittenhouse was paid a yearly salary of $2,000 and charged with obtaining the land and establishing the first Mint. This was a yoeman’s effort for the 60 year old Rittenhouse who was in bad health at the time. 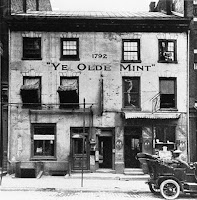 Pressing forward, Rittenhouse purchased and L-shaped lot with three buildings on Market Street in Philadelphia to establish the Mint in May 1792. Henry Voigt was appointed as Chief Coiner and Joseph Wright as Chief Engraver. Before Wright was able to prepare dies, he died of yellow fever in September 1792. He was replaced by Robert Scot who is considered the Mint’s first Chief Engraver.

From those humble beginnings in 1792, the US Mint is the largest manufacturer of coins in the world. The US Mint operates mints in Philadelphia, Denver, San Francisco, and West Point. The Mint also operates the United States Bullion Depository in Fort Knox, Kentucky and the Silver Depository in West Point. During fiscal year 2009, the US Mint produced $777 million in circulating coins with a total seigniorage (profit) of over $904 million from all sales including bullion.

Although there have been issues with the recent operations of the Mint, its 218 year history makes it a uniquely successful bureau in the United States government.