In what has the potential to be an exciting week in numismatics, the US Mint and the Bureau of Engraving and Printing will be introducing newly designed money to the public. 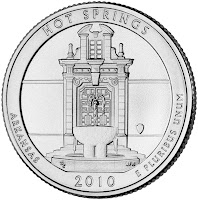 As part of the 2010 National Coin Week, on April 20, the U.S. Mint will launch the America the Beautiful Quarters™ Program with the release of the Hot Springs National Park Quarter. The ceremony will take place on the park’s 178th anniversary in front of the Administration Building at 10 A.M. Central Time (CT). A coin exchange will follow the event. The ceremony will be broadcast live on the web at americathebeautifulquarters.gov beginning at 9:55 A.M. (CT).

As part of the promotion for the launch, the US Mint has released B-Roll with images of the site, design footage showing the computer design of the coin, production footage including creating of the dies, and striking of the quarters.

Then, on April 21 in the Treasury Cash Room, the Bureau of Engraving and Printing will unveil a newly designed $100 Note. The U.S. government redesigns currency in order to stay ahead of counterfeiters and protect the public. The BEP has not previewed the new design.

The unveiling of the $100 note is the first step in a global multi-government agency public education program implemented by the Department of the Treasury, the Federal Reserve Board and the U.S. Secret Service, to educate those who use the $100 note about its changes before it begins circulating. The $100 note is the highest value denomination of U.S. currency in general circulation, and it circulates broadly around the world.

Program will begin at 10 A.M. Eastern Time (ET) and will include Secretary of the Treasury Timothy Geithner, Chairman of the Board of Governors of the Federal Reserve System Ben Bernanke, Treasurer of the United States Rosie Rios, Director of the United States Secret Service Mark Sullivan. Education and media materials, including the B-roll, will be available at www.newmoney.gov.