As I was going through my email and found a note from a reader who sent images of a 1993-D Lincoln cent where it looks like someone used a punch to create a heart design in the center of the coin (see image to the right). The reader asked if this may have been the result of the U.S. Mint trying to deface the coin and why it was placed into circulation. I was also asked if the coin had value—which is a natural question.

As the reader suggested, the markings are post minting but they were not made by the U.S. Mint. When the Mint cancels a coin they will run it through a machine that creates a waffle-like impression in the coin. Up until 2003, when the quality control officers at the U.S. Mint would remove coins from being circulated, they were separately bagged and placed under heavy guard between the Mint and the recycling center. 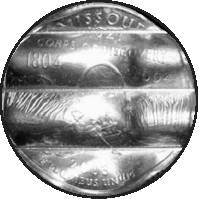 The security for coins that would never be circulated was costly. In mid-2003, the U.S. Mint purchased machines that will make the waffle-like impression as a way of defacing the coins to cancel them. These coins are called waffle cancelled. Later that year, the Mint sold these coins to a dealer who encapsulated them and sold them for a premium.

My first impression was that the person who stamped the design on this coin was a modern day love token. Love Tokens are not as popular as they were in the 19th century. Love tokens are circulated coins that were smoothed by sanding or polishing on one or both sides of the coin and then a design hand engraved into the coin. They were called love tokens because they were used as gifts to show love or affection for the person. Love tokens were popular in Great Britain in the early part of the 19th century and their popularity in the United States occurred after the Civil War through the end of the century.

Love tokens were engraved on any coin found in pocket change. Depending on the financial status of the engraver, smaller denominations coins were very popular. When wages were averaging 10 to 15-cents per day, it was difficult to justify higher denomination coins to engrave.

It is typical for love tokens to have a hole punched in the top of the design to be work around the neck. More “expensive” love tokens may have a loop or bezel attached to the top so that the design stands out from the chain. Others who could afford larger, higher denomination coin and could afford to add a pin to the back to wear on a lapel. Love tokens were also made into chains and bracelets. Mothers sometimes had bracelets that had love tokens with the initials of their children.

Each love token is a personal story of a gift given in love. It is rare that these coins have a documented provenance leaving collectors to speculate the meaning behind the fascinating designs. If you are interested in love tokens, you may want to check out the website for the Love Token Society.

Like love tokens, we can only speculate as to why someone punched the heart into the coin and why it ended up in circulation. I hope its appearance in circulation does not represent a rejection of an interesting gift.