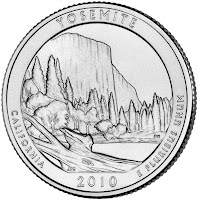 On July 29, 2010, US Mint director Ed Moy introduced the Yosemite National Park Quarter at the park in California. The coin fathers the image of El Capitan, the 3,000-foot vertical rock formation that is prominent formation that looms over Yosemite Valley.

Prior to being discovered by European-Americans in 1833, the Ahwahneechee people inhabited Yosemite Valley. As the gold-rush expanded the non-native population, U.S. troops burned Ahwahneechee villages in 1851, eventually driving them out of the valley. Within a few years, the lack of gold lead to entrepreneurs to use early photographs of the area to turn the area into a tourist destination.

By 1864, the commercial use of the area became a concern. Prominent citizens lobbied congress to pass a bill to declare the area a national park. The bill creating the Yosemite Grand was signed by President Abraham Lincoln on June 30, 1864. Yosemite Grant was managed by the Army until the National Park Service was created in 1916.

A coin exchange and roll sale followed the launch ceremony.

The following video of the launch ceremony was released by the U.S. Mint:

You can find the B-Roll package at NewsInfusion.com.