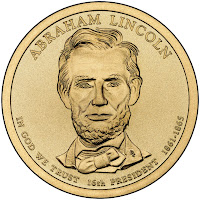 Image of the Lincoln Dollar courtesy of the U.S. Mint.