In scouring my email for whatever cyber bargains are out there, I received a note touting the 2010 Republic of Benin Plants of the World Scented Coins. Announced last March, the coins will represent four distinct plants of the world and their scents. Since the Republic of Benin is not exactly on my watch list, I was drawn read more when told that the scent was for Cannabis Sativa, more commonly known as marijuana!

The West African nation of Benin has joined Somalia, Palau, Cook Islands, and other small countries to produce coins with different designs and features to profit on the growing market in non-circulating legal tender (NCLT) coins. Not only is the plant of the reverse of the coin colored, but it is scented to smell like the plant. The scent is professionally mixed perfume that is embedded into the coloring that does not require the coin to be handled in order to smell the results. 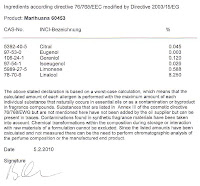 It is important to note that the scent does not contain tetrahydrocannabinol (THC) or any of the other cannabinoids that would cause problems at the airport or by law enforcement. Rather the fragrance is from synthetic materials that at worst could cause an allergic reaction.

The coins is silver plated over a copper-nickel base weighing 27 grams and is 28.61 mm in diameter. Its face value is 100 Francs CFA (about 20.2-cents in U.S. Dollars) and its production is limited to 2,500 pieces. Benin set the list price at $99.95, but it can be found for less, such as this online dealer.

This can be an interesting gift for your favorite numismatist, horticulturalist, or whomever this holiday season!