Looking Forward at the 2011 Coins

It is difficult to determine if 2010 was a good year for those collecting coins from the U.S. Mint. Unlike 2009, the U.S. Mint was able to strike both bullion and proof American Silver Eagle and American Gold Eagle coins. After the outrage of 2009, collectors appear to be happy that the proof Eagles have made a return.

Also new in 2010 were the American the Beautiful Quarters program with designs representing the first five national parks created by an act of congress. As part of each park’s introduction, either Director Edmund Moy or Associate Director Andy Brunhart has visited each of the 2010 celebrated sites for the introduction of the new quarters. Although it has been difficult finding these quarters in pocket change, these new coins had nice designs and was a chance for people to learn about the United State’s wonderful national parks. 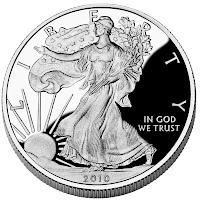 Bullion programs have caused angst amongst collectors and the U.S. Mint. Collectors found their collections with holes for the 2009 American Eagle Proof coins while waiting close to the end of 2010 to find out that proof Eagles will be produced.

Sales of bullion American Eagles have had mixed results. While the U.S. Mint has not produced bullion Platinum Eagles since 2008, sale of gold bullion has dropped from 2009. With the price of gold climbing from $1,100 at the beginning of the year to over $1,300 since September, investors may be looking for more cost effective investment option.

One investment option has been silver. With over 33 million silver Eagles produced through the first week of December, the U.S. Mint has produced more silver Eagles this year than in any years since the program started in 1986. Silver started the year around $17 per ounce, staggered into March, and then the prices began a slow rise. After breaking the $20 mark in September, the price has been hovering close to $30 the last few weeks. Silver closed at $30.50 on December 7 before dropping below $29 since.

From a collector’s perspective, this has made collecting American Eagles more expensive. Thankfully, the U.S. Mint has resolved its production issues and produced proof Eagles this year. We will see proof Eagles in 2011 with the passage of the Coin Modernization, Oversight, and Continuity Act of 2010 that changes the American Eagle Bullion law to allow the U.S. Mint to divert some metals for collectors coins.

Missing from the 2010 line up was the American Buffalo 24-karat Gold Coin. While still an authorized issued, the coin has not roamed the United States since 2008 in both bullion and proof issues. There has been no comment from the U.S. Mint as to whether the coins will make an appearance in 2011.

In the second year of the American the Beautiful Quarters Program. If the second year designs are as well executed as the first year, the program will continue to be a success from a collector perspective. The second group of quarters will honor Gettysburg National Military Park in Pennsylvania, Glacier National Park in Montana, Olympic National Park in Washington, Vicksburg National Military Park in Mississippi, and Chickasaw National Recreation Area in Oklahoma. The U.S. Mint’s line art shows promise for a very nice looking series.

One part of the American the Beautiful Quarters Program has been the issue of three-inch five-ounce .999 silver bullion coins. Production problems have delayed the release of these coins. According to the U.S. Mint’s press release, there may be collector versions of the coin with limited production runs. Considering the high costs set by the U.S. Mint, it may be difficult for some collectors to justify. But with the production issues worked out, maybe the 2011 versions may sell better. 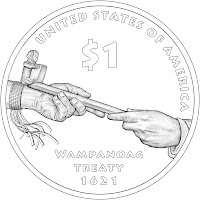 For the third year of the Native American $1 Coin program, the theme for 2011 is “Supreme Sachem Ousamequin, Massasoit of the Great Wampanoag Nation Creates Alliance with Settlers at Plymouth Bay (1621)” celebrating one of the first peace treaties between the Native Americans and the Puritans who settled at Plymouth Bay. The reverse of the coin depicts the hands of the Supreme Sachem Ousamequin Massasoit and Governor John Carver symbolically offering the ceremonial peace pipe after the initiation of the first formal written peace treaty. The designs of the Native American coins have been so well thought out and executed that this one will be a wonderful addition to your collection.

Continuing the Presidential $1 Coin program, the 2011 coins will honor Presidents Andrew Johnson, Ulysses S. Grant, Rutherford B. Hayes, and James A. Garfield. History buffs will begin with President Johnson who was the first president that was impeached but not convicted, followed by three bearded Republicans who started and perpetuated reconstruction through the 19th century. The 2011 series ends with President Garfield whose 200 day term ended with his death on September 18, 1881.

Those collecting the First Spouse Gold Coins will have a year where all four issues will depict the First Lady’s of the era. Standing behind or along side the Presidents where Eliza Johnson, Julia Grant, Lucy Hayes, and Lucretia Garfield. Remember, if you cannot afford the gold coins, the U.S. Mint sells bronze medals using the same design but without the denomination. 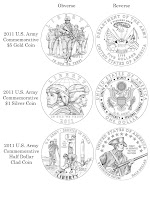 Collectors of commemorative coins will have two multi-coin commemorative issues in 2011, both with a military theme. The first commemorative will be the United States Army Commemorative to honor the history of the U.S. Army from the Revolutionary War through today. The U.S. Army Commemorative will be a three-coin set consisting of a gold $5 proof, silver $1 proof, and cupronickel clad half-dollar proof. The obverse of the gold coin represents the U.S. Army’s war service from the Revolutionary War through today. It features a representation of Continental, Civil War, modern, World War II and World War I soldiers. The reverse is based on the official U.S. Army emblem and represents the unbroken history of loyalty and commitment to defend the Nation.

The obverse of the silver proof depicts the busts of a male and female soldier, symbolizing worldwide deployment of the 21st century U.S. Army. On the reverse, the design symbolizes the seven core values of the U.S. Army featuring an image of the Great Seal of the United States that has been worn on U.S. Army dress and service uniforms since the early 19th Century.

The obverse of the clad half-dollar proof represents the significant contributions of the U.S. Army during peacetime and features a U.S. Army soldier surveying, two servicemen building a flood wall and a Redstone Army rocket used during early space exploration. The reverse design symbolizes the U.S. Army as the first military service to defend the country and its key role in the Nation’s internal development. It features an enlisted Continental soldier armed with a musket and 13 stars representing the original Colonies.

Mintage is limited to 100,000 gold, 500,000 silver, and 750,000 clad coins. The sales price will include a $35 surcharge for each gold coin, a $10 surcharge for each silver coin, and $5 for each clad coin sold. Proceeds from the sales of this commemorative ($12.25 million if all coins are sold) will go to the construction of the National Museum of the United States Army. 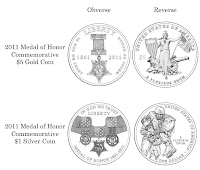 The other commemorative will be the 2011 Medal of Honor Commemorative Coin program. This two-coin set features a $5 gold proof and $1 silver proof coin. The obverse of the gold coin depicts the original Medal of Honor designed in 1861 by the U.S. Mint. The reverse design of the gold coin features Minerva, the Roman goddess wisdom and war, who is featured on the medals. Minerva is standing with a shield representing the Army and Navy in her right hand and the Union flag in her left hand. She is flanked by a field artillery cannon and wheel of the Civil War era.

The obverse of the silver commemorative coin will feature the three current Army, Navy, and Air Force medals with their ribbon and the connecting pad featuring 13 stars. Since the Medal of Honor is the only medal not pinned to the uniform, it was important to depict the ribbon that is used to wear the medal around the recipient’s neck. The reverse design depicts an Army infantry soldier carrying a wounded soldier to safety under enemy fire. This image conveys the courage, selfless sacrifice and patriotism of Medal of Honor recipients.

Mintage is limited to 100,000 gold and 500,000 silver coins. The sales price will include a $35 surcharge for each gold coin and a $10 surcharge for each silver coin sold. Proceeds for the sale ($8.5 million if sold out) will be distributed to the Congressional Medal of Honor Foundation to support their educational, scholarship and outreach programs.

It appears that 2010 was better than 2009 as the economy improved. Maybe there will be more of a recovery to help make 2011 even better.

Click on any image to see the larger version.
Coin images courtesy of the U.S. Mint.