NumisSociety, an online grass-roots community of numismatists, announced that the community is advocating a “National Spend a 1918 Lincoln Cent Day” on Memorial Day, May 30, 2011.

NumisSociety members were inspired by a story written by Dave Harper in Numismatic News. Harper writes about a letter he received from Army SGT Jarrett Briscoe who is stationed in Kuwait. In the letter, SGT Briscoe sent Harper a 1918 Lincoln Cent he received in change after a transaction with a local. Astonished to find a coin that old and so far away from home, SGT Briscoe asked Harper to “return it home” by putting it back into circulation in the United States.

It was a touching story that inspired the members of the NumisSociety. NumisSociety community members decided to join together to make this a truly memorable Memorial Day. In honor of SGT Briscoe and all members of our Armed Forces present and past, they want as many people to spend a 1918 Lincoln Cent in all 50 United States.

If you are interested, sign up at the NumisSocieity website and let them know (here) what state you will spend a 1918 Lincoln Cent on Memorial Day.

This is such a great idea, that I dug through my excess inventory and found a coin that I will spend on that day (after I remove it from its 2×2). It is the least I can do to be part of this effort to honor those who served and continue to serve on behalf of this country. 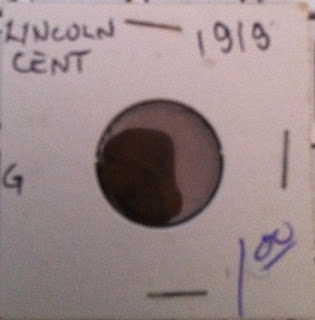