Collecting a Herd of Buffaloes [updated]

The American Buffalo, or more accurately called the American Bison, was once king of the American Plains. Until the 19th century, it roamed freely until they were almost hunted and slaughtered to extinction. Still, the buffalo represents the United State’s expansion to the west and the growth of the nation. It is just an All-American symbol.

Putting together a Buffalo Type set could be easy, depending on the coins you choose, but it can get expensive. If you choose all proof coins, it could get very expensive. In any case, you can put together a nice collection of coins with buffaloes on them.

Looking at a buffalo type collection, we have to start with the Buffalo Nickel. Designed by James Earle Fraser, the Buffalo Nickel was struck by the U.S. Mint from 1913 to 1987. The obverse of the coin features a Native American that Fraser said was a composite design of three chiefs and the reverse is a buffalo that Fraser was modeled after Black Diamond, an American bison he found at the Bronx Zoo. Both claims by Fraser has been controversial since several American Indian Chiefs claimed to have been Fraser’s model and Black Diamond was housed at the Central Park Zoo. In either case, it is a wonderful coin and a great start to a collection.

For the type collection, there are two varieties of Buffalo Nickels. Variety 1 is the original where the buffalo is standing on a mound that was only issued in 1913. After finding that the lettering that said “Five Cents” and the mint mark wore off easily, the U.S. Mint hollowed out the mound making it look like a line that the buffalo stood on. The second variety was used until the last Buffalo Nickel was struck in 1938. 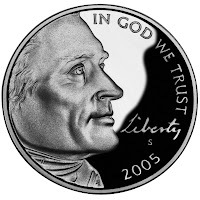 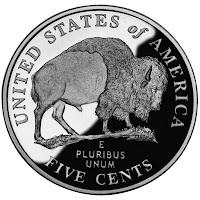 Keeping with nickels, the first issue of the 2005 Westward Journey Nickels had a bison on the reverse. Not only did it have a bison, but it featured an attractive portrait of Thomas Jefferson by artist Joe Fitzgerald. That portrait of Jefferson has the most character of any presidential portrait that has appeared on a coin. Too bad they U.S. Mint issued it only in 2005. Since this is an easy and inexpensive purchase, I think I would add both the P and D business strikes along with an S mint proof coin.

Two more easy coins are the 2005 Kansas State Quarter and the 2006 North Dakota State Quarter. Both quarters are highly available in uncirculated grades making it easy to collect P and D mint coins. The question then is whether to collect one proof or the clad and silver proof. Since both are readily available, I am going to add both to the collection.

<UPDATE>
Originally, I forgot about looking at the National Park Quarters for buffaloes. One of the reasons is that I have yet to see one in pocket change. But the 2010 Yellowstone National Park Quarter does feature a buffalo standing in front of Old Faithful erupting. Like the state quarters, circulating coins were struck in Philadelphia and Denver. There were also clad proof and silver proof. It is probably costs the same to collect these sets as with the State Quarters, so we will add all four coins to this collection.
</UPDATE> 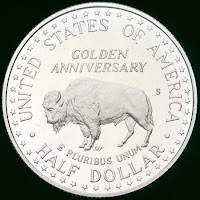 Moving from circulating coins to commemoratives, the first coin is the 1991 Mount Rushmore Golden Anniversary Half Dollar. While the the obverse has a nice image of the Gutzon Borglum masterpiece carved into the Black Hills of North Dakota, the reverse uses a classic design of a buffalo. Since there were so many of these coins struck, both the 1991-D (uncirculated) and 1991-S (proof) are available as inexpensive additions. So let’s get both for our type collection! 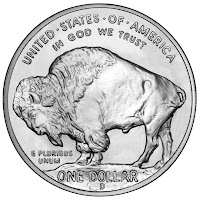 A little more expensive addition is the 2001 American Buffalo Dollar. Struck as uncirculated in Denver and proof in Philadelphia, this coin has been in high demand, which shows in its price. Although the coin was criticized for not being as faithful to James Earle Frasier’s original design, the buffalo on the reverse is well done while being proportionally smaller than it should have been. Even though both the uncirculated and proof coins can cost between $150-200, I think I will stick with the proof. I think proof coins are better looking. 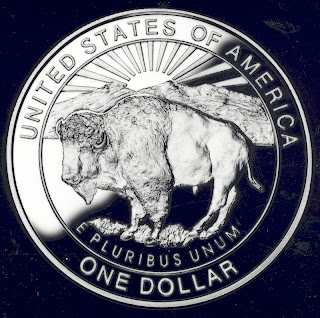 Another commemorative that includes a buffalo is the 1999 Yellowstone National Park Commemorative Silver Dollar. Struck to commemorate the 125th anniversary of the park’s establishment by Ulysses S. Grant in 1872, the proceeds given to the Yellowstone National Park and the National Park Foundation to help maintain the U.S. national park system. The obverse is shows Old Faithful, one of the park’s main attractions, erupting. The reverse is an adaptation of the National Park Service’s official agency logo. Since there is little difference in the price between the uncirculated and the proof, I will add both for somewhere in the $35-40 range, each.
</UPDATE> 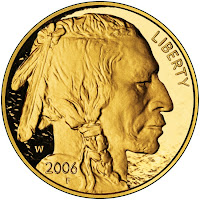 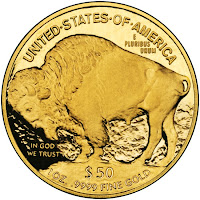 Now for the higher end is the American Buffalo 24-Karat Bullion Gold Coin. Since the program started in 2006, the U.S. Mint has been producing a one-ounce 24-karat gold coin with a very faithful image of James Earle Frasier’s Type 1 design. The textured fields on the obverse of the coin adds character to the large gold disk and makes it a very attractive coin. Fortunately for me, I own a 2006 proof American Buffalo coin from when the spot price of gold is almost half of what it is today. But if I was starting this collection today, I would only purchase the proof coin since it looks much nicer than its uncirculated cousin.

In 2008 and 2009, the U.S. Mint struck fractional gold American Buffalo coins in ½-, ¼-, and 1⁄10-ounce coins. If you can afford the one-ounce coin, I would suggest buying one. But if you cannot, the 1⁄10-ounce proof coin is worth the spot price of its gold content ($159.41 as I type this) plus 10-15 percent. Having the option to purchase the fractional gold coins makes this set more affordable.

For extra credit, how about adding one currency item to the collection? In 1901, the Bureau of Engraving and Printing printed the $10 Legal Tender Note (Fr.#114-122) with an image of a buffalo surrounded by portraits of Meriwether Lewis and William Clark. Aside from being my favorite note, it is ranked sixth in the book 100 Greatest American Currency Notes, by Q.David Bowers and David M. Sundman. It is possible for find a nice specimen in Fine and Very Fine condition for $500-800 depending which issue you purchase and where you buy one. Higher grades can push the price over $2,000! Adding one to this type collection would be wonderful.

This would make an attractive type set consisting of:

It is such a good idea, I might just put together a set!