Long before the invention of electricity, before steam powered everything, and even before the perfection in the forging of iron and steel to make manual machines, coins were hammered by strong men in order to impress the image on the coinage metals.

Hammered coins were struck from ancient times until the screw coin press was invented by German silversmith Max Schwab around 1550. Hammered coins were struck by frost placing a coin blank on a stationary die (anvil die) that was attached or sunk into a log or another hard surface. The anvil die produced the reverse image. Then, holding the obverse die (trussel) in one hand, the coiner swung the hammer and forced the dies into the coin blank. The pressure from the hammering pushed the metal into the crevices of the dies including the stationary lower die to create the impression. It would take multiple hammer strikes in order to impress the image into the coin.

Hammered coins were rarely perfectly round. Aside from there being no collar surrounding the blank to keep it in place, Depending on the strength and skill of the coiner, the image may not transfer perfectly, the thickness may vary, the coin could exhibit flat edges, and striking errors. Collectors of these coins, mostly pre-17th century, find beauty in the character of each strike.

Monnaie de Paris (The Paris Mint) announced that it will create coins with the theme “From Clovis to the Republic” commemorating 1500 years of the history of France. The theme and design concepts were created by famed designer Christian Lacroix, Artistic Advisor of the Monnaie de Paris. The series will celebrate 15 kings, emperors, and presidents over five years that represents French history from Clovis I through Fraçois Metterand. 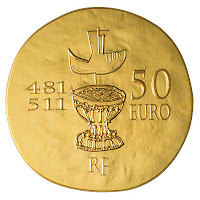 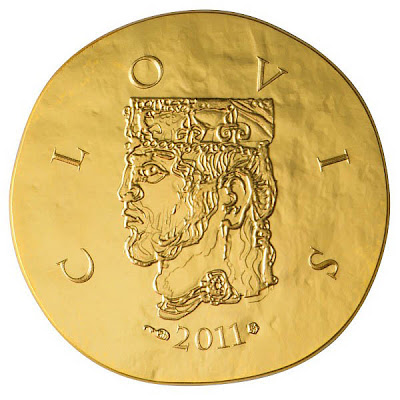 To give the coin a similar character to what might have existed during the time of Clovis and Charlemagne, Monnaie de Paris developed a method to make the coin appear to be hammer struck using modern minting equipment. The obverse of both coins has a portrait as it might have appeared at the time.

The reverse of the Clovis coin has a dove flying over a baptismal font representing his Catholic heritage. 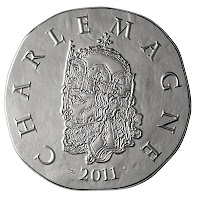 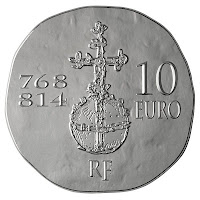 The reverse of the Charlemagne coin features a cross-bearing orb (globus cruciger in Latin), Charlemagne’s symbol of his sovereignty and power as the first emperor of the Holy Roman Empire.

To the left of the reverse image are the years of their reign. To the right is the denomination. Below the image are the letters “RF” for République Français for “The French Republic.”

I like the idea to make commemoratives honoring historic figures designed and struck to look close to period pieces. It will be interesting to see how the people who vote for Coin of the Year reacts to these coins.