After writing Collecting a Herd of Buffaloes, a reader and I have been discussing creating another type collection that would best represent the Lincoln Cent. The thought was that since the Lincoln Cent is over 100 years old with so many key (1909-S VDB, 1914-D, and 1931-S) and semi-key dates (1910-1915 S mint coins, 1924-D, and 1926-S) with some very interesting errors and varieties (1955 DDO, 1922 No/Weak D, and various small and large dates), that collecting the series may be too challenging for someone just starting collecting.

How does someone represent a series that spans over 100 years? First, looking at the basic type-set there are a lot of holes in the series. For example, after collecting the Type 1 Lincoln Cent (VDB on the reverse), the wheat-back design continues until 1958 with the only “change” being the zinc-coated steel cents struck in 1943. Aside from being uninteresting, it did not represent the history that the Lincoln Cent has seen through its first 50 years.

If we look at 20th century history, there seems to be a pattern of history being recorded every decade, or so. It is not a perfect cycle, but close enough to look at putting together a series by decade accounting for history, type changes, another of other factors to make the collection interesting. The first coin of this set is the 1909 VDB. With more than 27 million coins struck in Philadelphia, it is possible to get a fair price on a nice uncirculated red example. Since the Lincoln Cent was first struck in Philadelphia, it is appropriate to start a collection with the first coin produced for the series.

There was a lot of history in the 1910s. For collectors, much of the coins of the first half of the decade are expansive to find in higher grades. The only year that is affordable in higher grades is 1919. In 1919, the Treaty of Versailles officially ended the “War to End All Wars” (World War I) and the economy in the United States was still producing goods not only to rebuild the military but to sell to war-torn Europe. The high demand for cents made 1919 the year with the highest production making it more likely to find good examples in high grades. 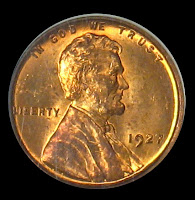 The Roaring Twenties was known for its sustained economic stability, industrial growth, new inventions, art deco, women’s suffrage, and the wide acceptance of jazz music. It was also the decade that saw the growth of the organized crime controlling the illegal flow of alcohol and speakeasies. The demand for coins were great, especially in the second half of the decade. Almost any Lincoln Cent from 1926 through 1929 can be affordably purchased in uncirculated grades so we decided on 1927 to be a good representation of the era.

All went well until October 29, 1929, Black Tuesday. Subsequent years marked a great panic that included bank runs and high unemployment. Things became worse when Secretary of the Treasury Andrew Mellon insisted on draconian measures that would close what he considered weak banks and transfer assets to larger banks at pennies on the dollar that wiped out many people’s savings. Rather than trying to infuse cash into circulation to try to spur the economy, Mellon advocated deep federal spending cuts to balance the federal budget and opposed economic stimulus measures. His plan did not help the economy and plunged the country deeper into the Great Depression. Mellon was accused purposely sabotaging the economy and colluding with bankers and industrialists to profit from the crisis. Just before a vote on the whether articles of impeachment would be sent to the full House from the House Judiciary Committee, Mellon was appointed Ambassador to the Court of St. James (United Kingdom) and resigned as Treasury Secretary.

When Franklin D. Roosevelt was inaugurated, he appointed William Woodin as Secretary of the Treasury. Working with his predecessor, Ogden Mills, these men came up with a plan to try bring the country out o the depression. Part of the plan was to have FDR order gold withdrawn from private hands. Since Woodin was a coin collector, he made certain that the order include an exception for “rare and unusual coin types.” To honor Woodin and to have the collection represent the era, this Lincoln Cent collection will include a nice 1933 cent.

It is generally accepted that World War II began on September 1, 1939 when German invaded Poland although Japan invaded China in 1936. With Germany and Italy trying to conquer Europe and Japan attacking China and Russia from the Far East, there was a passivist movement in the United States. The problem was “over there” and had nothing to do with us. That changed on December 7, 1941 when the Japanese Navy attacked the U.S. Naval Base at Pearl Harbor. A Declaration of War on Japan was passed on December 8 and on Germany and Italy on December 11. Since copper was necessary for the manufacture of ammunition and other armaments, laws were passed that changed the composition of the Lincoln Cent from bronze (copper-zinc) to zinc-coated steel. When the U.S. Mint struck the steel cents in 1943, it marked the only time in the country’s history that a circulating coin was struck without any copper. Finding high grades of steel cents are relatively easy and inexpensive because so many were minted. Thus, our collection will have one steel cent from each branch Mint.

From 1944-1946, spent shells from military training grounds were collected and melted to use for striking coins. Using those shells, the bronze composition returned and copper cents began to circulate driving the unpopular steel cents out of circulation. As a type, these coins are known as “Shotgun Cents” because of the use of the shell casings. Since both V-E Day and V-J Day both happened in 1945, this set will include a 1945 Lincoln Cent. 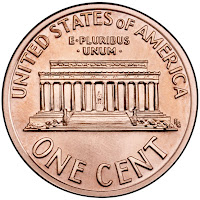 Following 1946, the composition of the cent changed slightly to a bronze that included copper (.950), zinc and tin (.050). This would remain the composition until 1982. Before then, the reverse design would change to the Memorial Reverse in 1959. First, we need a coin for this new composition. For this we decided on a 1955 cent. Aside from being plentiful and inexpensive in uncirculated red grades, it was the year that the Brooklyn Dodgers finally won the World Series—a fitting tribute for the decade. Then, add a 1959 first-year Memorial Cent to the collection to complement the first issue wheat-back cents.

Finding uncirculated red Memorial Cents are very easy. Many were struck in the billions and many were saved in collections and rolls making them highly available and very affordable. Choosing Memorial Cents is a matter of trying to match the dates with historical significance. For example, after the coin shortages of the early 1960s, the U.S. Mint stopped producing coins with mint marks. By omitting the mint marks, it was felt that collectors, who were initially blamed for the shortage, would not hoard coins. Once it was determined that collectors were not the cause of the shortage, mint marks returned to the Lincoln Cent in 1968. So let’s add a 1968-D cent to the collection to include the first coins struck with a mint mark after their removal in 1965.

The 1970s was an interesting decade that included the resignation of Richard Nixon, the American Revolution Bicentennial Celebration in 1976, and my high school graduation. But for the Lincoln Cent, this collection will have a 1974-S to represent the last S mint marked coin struck for circulation in San Francisco. Although some cents were struck in San Francisco in the 1980s, they were struck without mint marks and cannot be differentiated from coins struck in Philadelphia. 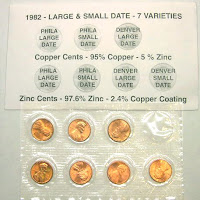 One more change in composition came in 1982 when the Lincoln Cent went from bronze to copper-coated zinc. Also in 1982, there was a change in the dies that caused both large and small dates to appear on both compositions. To mark this transition, the collection will include a set of all seven varieties that includes coins from both Philadelphia and Denver. Rather than buying these coins individually, the collection can include a pre-packaged set that can be bought from any dealer, at a coin show, or online for under $25. It is a perfect way to mark the transition.

For the Lincoln Cent, history there after was bland. But the collection needs a representative from the copper-coated zinc era to end the 20th century. We chose a 1999 Lincoln Cent for no other reason that while thinking about it, the song “1999” by Prince came up in the discussion. Since the song was release in 1982 on the album titled “1999,” it seemed a fitting tie in for the collection. 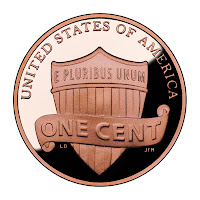 Next is a 2001 cent to celebrate the start of a new century/millennium (we count years from one, not zero!) and one from 2008 as the last Memorial Cent of the series. Of course the set will include the four types from the Lincoln Bicentennial and Cent Centennial celebration. However, since the bronze (copper-zinc) versions are available from the sets sold by the U.S. Mint, the set will include those instead of the copper-coated zinc coins that were circulated.

Finally, this collection ends (for now) with a 2010 Shield Reverse Cent so that we continue with the pattern with including an example from the first issues.

One of the reason I love my readers is that they can pick up on something I miss. One reader reminded me that a type set should include a Lincoln Cent with no designer initials. After the U.S. Mint removed the “V.D.B” on the reverse of the early 1909 cents, Victor D. Brenner’s initials did not reappear on the coin until 1918. So that the set is complete, a first-issue without initials 1909 is an affordable option.

When complete, our Lincoln Cent representative collection looks like:

This collection is 26 27 coins making it more manageable and affordable than collecting the entire set. Dates can be changed or added to represent significant family events, such as the birth of family members. Youngsters can enhance their collection by writing a paragraph or two about each of the coins.