On the “eleventh hour of the eleventh day of the eleventh month” in 1918, hostilities were ended on the Western Front of World War I. Although this is accepted as the end of the “War to End All Wars,” fighting continued across the Russian Empire and in areas of the old Ottoman Empire. A year later, President Woodrow Wilson proclaimed November 11 Armistice Day as a national holiday to celebrate those who served and honor those that died.

Alvin King, a shoe repair shop owner in Emporia, Kansas, had the idea to celebrate all veterans on November 11. King lobbied the city of Emporia to close in honor of all veterans. Representative Ed Rees of Emporia shepherded a bill through congress to rename the holiday Veterans Day to honor all who have served. President Dwight Eisenhower signed the bill into law in 1954.

On Veterans Day, we pay tribute to our veterans, to the fallen, and to their families. To honor their contributions to our Nation, let us strive with renewed determination to keep the promises we have made to all who have answered our country’s call. As we fulfill our obligations to them, we keep faith with the patriots who have risked their lives to preserve our Union, and with the ideals of service and sacrifice upon which our Republic was founded.† 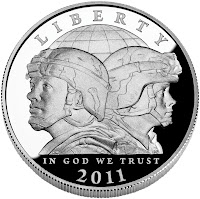 If you are looking for a way to honor veterans, consider supporting The Army Historical Foundation and their effort to build The National Museum of the United States Army. You can support their efforts by donating to the organization or by purchasing a 2011 United States Army Commemorative Coin. Available as a $5 gold coin, $1 silver coin, and half-dollar clad coin, the surcharges ($35 gold, $10 silver, and $5 clad) will be paid to The Army Historical Foundation to support the construction of the museum.

Take this opportunity to honor the nation’s veterans and support this worthy effort.