For the first time since the 2008 World’s Fair of Money, I went to a coin show. Attending the Whitman Baltimore Expo was timed so that I could be there before the Annual Meeting of the Maryland State Numismatic Association (MSNA), but so not to spend a lot of time on my bad leg. When I arrived after 1:30 PM, there was still nice activity on the bourse floor. Although some dealers had left the show, there was a significant presence. After carefully assessing the landscape, it appears that the folks at Whitman has moved dealers around so that the area near the entrance continues to have active dealers. 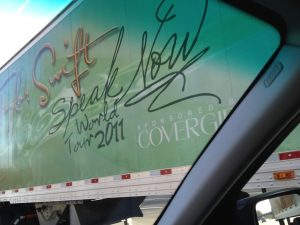 Seen on the way to the Whitman Baltimore Expo!

On my way to Baltimore driving north on I-95 from the Capital Beltway, I came upon an interesting looking turquoise truck. As I approached, I noticed it had Taylor Swift’s signature. While I am not one of her fans, seeing a concert equipment truck on I-95 is not a usual occurrence. Searching on-line, the truck must be traveling to New York from Columbia, South Carolina. Taylor was playing November 20-21 in Madison Square Garden.

When I arrived I did a quick tour of the bourse floor toward Halls B and C. For this show, I found that the dealers in Hall C were the most active and had the some of the more interesting items. Before going into the Hall C area, I found a dealer in foreign coins to sell some Canadian silver dollars. With that money, I went to Hall C and purchased 2011 silver Panda and Britannia coins.

Time was short, so I went to the third floor to find the meeting room for the MSNA meeting. Since the floors above the bourse were reserved for educational seminars for the American Physical Society, meeting rooms for the Whitman show were reserved more than half-way to the Camden Yards end of the Baltimore Convention Center. If you have not visited the BCC, it is a very large structure and the walk is not easy for someone with a bad leg. But I made it and the MSNA Board accomplished some work.

Amongst the agenda items was the installation of officers. With that, I am now the Vice President of the MSNA. Since this is the first time I am an officer, I have to buy a red sports jacket like the rest of the board. I should have one by the Whitman Expo in March. 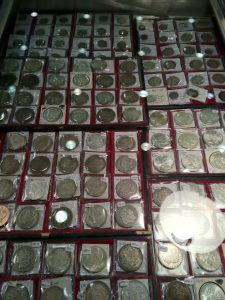 On my return to the bourse floor, I noticed more than half the dealers had packed and left the show. For me, this is not a problem since I was more interested in the interesting item from the dealers that were left, primarily at the far end of Hall B and the dealers in Hall C. For the first time, I stopped at the table of a dealer who was selling ancient coins. Although I am not a collector of ancients, I have supported Ancient Coin Collectors Guild (ACCG) and their efforts to prevent import/export restrictions on ancient coins. I spoke with the dealer for a few moments asking questions about the ancient coin market.

I also had the chance to speak with Bob Hall, a numismatic book dealer. Every time I see him at a show, I make sure I stop by his table. Hall has a wide selection of books from the current to the old. He is also a good conversationalist who really knows his stuff. Even though I did find a book I was interested in, it was a bit out of my price range. I will try again in March.

One thing I noticed is that there did not seem to be a currency area. Currency dealers were found in different places and not in one particular area.

At the end, I sat at the table of one dealer in Hall C and went through his “junk bag” of foreign currency. Flipping through those notes gave me an idea for a collection and potential exhibition. If I can find currency with the appropriate characteristics, I will have an exhibit ready for the Whitman Expo in March.

After the show closed for the evening, returned to my car happy to be off of my feet. After a stop for an appropriate beverage, I spent the next hour driving home.

That was a lot of fun, even for a few hours. I will have to look into going to a smaller show before the next Whitman Expo.