Being Charitable By Overpaying for Collectibles

Every year, usually in December, my coin club holds its annual Donated Auction. It is an auction that lasts the entire meeting of various numismatic items where the proceeds go to the local chapter of the Boys and Girls Club. It is a tradition that has existed for the 52 years of the club’s existence and I am happy that it continues.

As opposed to our regular monthly auction, there are more lots and a lot of different type of items. And since the proceeds go to charity, we are encourage to bid early and bid often. I have to admit that on items I really want, I have been known to overbid on items. 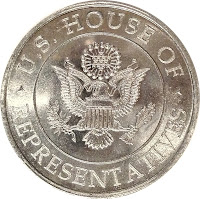 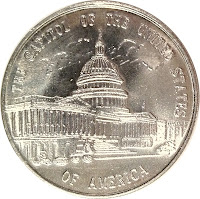 One of my overbids was for a lot with two rolls of Lincoln Cents; one roll contained 40 steel cents and the other had 50 miscellaneous wheat back cents. However, as a bonus, this lot included a U.S. House of Representatives token. Made of aluminum, about 40mm in diameter, the front of the token is the seal of the U.S. House of Representatives. The reverse depicts the east entrance of the capitol building with the south wing closer to the foreground. The south wing is where the chamber for the House of Representatives is located. The member that donated the token was a former staffer for one of the House committees who told me that the tokens were provided to staffers to give to visitors. Although the token is made of aluminum and not that rare, I have not seen one. Since I thought it had that “oh neat” factor, I overbid in order to win the lot and this token. 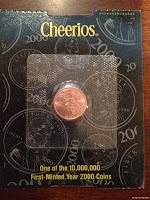 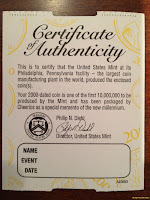 My other “oh neat” purchase was a Cheerios Penny. The Cheerios Penny is a 2000 Lincoln Cent that placed onto plastic-sealed cards and placed in boxes of Cheerios as a special Y2K promotion. Cheerios was provided the first 10 million Lincoln Cents off the presses in 2000 by the U.S. Mint. These cents are really unremarkable except for being in the Cheerios package. The remarkable cents also included one of the first 5,500 new Sacagawea Dollars to raise awareness of the new “Golden Dollars.” The Cheerios Dollar is notable as being struck from different dies than the regular business strike Sacagawea Dollars.

According to the auction lot listing, there was supposed to be one Cheerios Cent and three wooden nickels. However, when I arrived at home and opened the package, there were two Cheerios Cents. If you would like your own Cheerios Cent, you can buy it on eBay!

Buying “oh neat” with the proceeds going to charity is a lot of fun.