Your blog host is happy today as his favorite team, New York Giants, lead by MVP Eli Manning, beat the New England Patriots in Super Bowl XLVI. As a die-hard Giants fan, I worried if the team that was dominated by the 5-11 Redskins in Week 16 would show up or would the run that started the next week against the Jets continue. Like every game in the run, the Giants did just enough to hang in before putting the ball in Eli’s hands to let him do his magic. 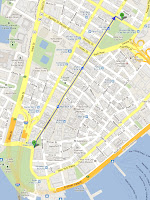 The game started like every other football game does with the coin toss. For the last 21 Super Bowls, including Sunday’s Super Bowl XLVI, the Official Coin used for the coin toss is made by The Highland Mint of Melbourne, Florida.

You can find out more about how the coin is made complements of FloridaToday.com:

The Highland Mint strikes 10,000 coins and are numbered. The first 100 are sent to the NFL where number 1 is used for the coin toss. After the game, it is sent to the Pro Football Hall of Fame in Canton, Ohio.

In the following video, you can see more of the manual aspects of the minting process, including the gentleman sitting at a machine that stamps numbers into the coins which is shown in the second-to-last scene.

If you are a member of the Papa Rewards Program, the loyalty program for Papa John’s Pizza, your interest in the coin toss ended when it landed on heads and you won a free pizza and soda. Enjoy your pizza!