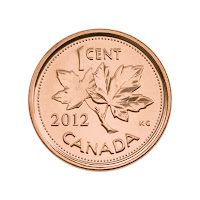 Dignitaries were present at the Royal Canadian Mint in Winnipeg to honor (or mourn) the striking of the last Canadian penny.

Citing its low buying power and that it costs 1.6 Canadian cents to produce one coin, Canadian Finance Minister Jim Flaherty announced in March that the government will end the coin’s production. Cash sales will be rounded up or down to the nearest 5-cents while non-cash transaction will continue to be settled to the nearest cent.

After a brief ceremony that included Flaherty and Ian E. Bennett, President and CEO of the Royal Canadian Mint, the last penny was struck and carried from the presses by Flaherty. It will be given to the Canadian Currency Museum located within the Bank of Canada complex in downtown Ottawa for display