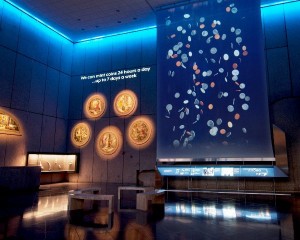 The new visitor lobby at the Philadelphia Mint

On July 3, the U.S. Mint in Philadelphia opened their newly renovated tour and public areas to the public. Before the opening, the unveiling started with Family Day at the Mint that included workers and the families of Mint workers going through the new tour areas. The event attracted over 700 employees and their families.

Eleven members of the media were invited to see the new tour area, access to the Mint floor, Mint employees, and other areas of the Mint not accessible by the public.

Tom Jurkowsky, Director of Public Affairs, was sure to point out that the project was, “on time and on budget.”

Finally, the Philadelphia Mint held an opening ceremony to 250 invited guests and Mint employees. Speaking at the ceremony included Associate Mint Director Dick Peterson and Treasurer of the United States Rosie Rios. The ribbon was cut by Rios flanked by Peterson and Jurkowsky.

You can download the brochure A Handbook to the Self-Guided Tour of the United States Mint [PDF] from the U.S. Mint’s website.

The U.S. Mint recently provided a video about the opening of the new tour area. You can watch it here:

Anyone attending the World’s Fair of Money next week in Philadelphia may want to consider taking the new tour and adding your comment about it here!