If It’s Saturday It Must Be Fredericksburg

On Saturday I had the pleasure of attending the Virginia Numismatic Association Annual Show in Fredericksburg, Virginia. Fredericksburg is about half-way between Washington, DC and Richmond. After a late morning start, I ate a quick breakfast and climbed into the old X3 and hit the road to make my first stop to honor National Coffee Day at a nearby coffee shop.

With hot java in the accessible coffee holder, the X3 was pointed to the highway and we headed south to Fredericksburg. For the most part, it was a pleasant trip except for the last 12 miles where I found myself in what was called a usual traffic delay to the Rappahannock River. Along the way, I was able to use the new iOS 6 maps program with GPS capabilities with no issue. For those who heard the alleged “horrors” of Apple’s map program, I found that for daily use I have had no problems. I think most people who do not try to find obscure addresses (i.e., like trying to map an weird address near a park) will find that it is a quite adequate app.

Relieved of the frustration caused by I-95 traffic, I exited at Route 3 and let the GPS guide me to the Fredericksburg Expo & Conference Center. It is a nice facility with nearby hotels and a large shopping area. Travelers who might have forgotten something would not have to travel far to find a replacement.

Interestingly, the USA Fencing Virginia 2012 KickOff Classic Circuit Fencing Tournament was being held in a different part of the center. It made for a good mix of numismatists and fencers walking in the parking lot. However, it was a little disconcerting when a gentleman was walking toward me in the parking lot carrying four fencing foils!

I registered at the front door and spoke with a number of the VNA people. I met a few of their officers and talked while I wrote my name on a few raffle tickets. Each hour, the VNA raffles of something. There were books, coins, tokens, and medals in the case that showed what was part of each hour’s raffle. You do not have to be present to win, but I did have to write my name and telephone number on 11 tickets which I purchased for $10. Once done, I walked by a Stafford County police officer and entered the bourse floor.

The show was in a pretty large hall with about 50 tables. There seemed to be a slight din of activity but nothing too overwhelming. As I walked around the floor looking at the items on a number of tables, I spoke with quite a few people. There were even a few I had met at other shows like the Whitman Baltimore show. Some said that Saturday was a bit slow, especially as compared to previous years. After a while, I asked some of the Virginia-based dealers if the nice weather and the college football games, specifically the Virginia Tech-Cincinnati game that was played at FedEx Field in Landover, Maryland (home of the Washington Redskins) and the Virginia-Louisiana Tech game in Charlottesville (both Virginia schools lost).

It has been a long time since I have been to a smaller show (under 100 tables). Even with the large venue, the fewer tables and with dealers I have never met before from areas of Virginia and North Carolina, it made for a relaxing atmosphere. Many of these dealers also had a different way of handling their inventory such as currency dealers who did not have everything graded and many of their lower quality but desirable series in books in the table for collectors to browse. For the collector on a budget who wants to consider notes with character, being able to flip through a book of these notes is a great idea and, even if you are not a currency collector, a lot of fun just to look. I liked having this type of accessibility and it was refreshing.

There were not many exhibits at this show. I did capture two pictures of exhibits I thought were interesting (see my Pinterest board), but I wish there were more.

At the end of the aisles in the center was an exhibit of philately (stamps) along with pictures that were about Virginia and the its role in the Civil War and after. This exhibit has a few great, vintage pictures of General Ulysses S. Grant (before he became president) including one where his portrait is aside one of General Robert E. Lee. Unfortunately, the pictures had take did not come out well (and I forgot to try again after being distracted).

After four hours of looking and schmoozing, I went back to the X3, plugged in my iPhone, and found that the game was being streamed by CBS through their iPhone app. After a stop to make sure I supported National Coffee Day again, I plugged in the iPhone and listened to the broadcast during the drive home. I am not sure which was worse, the traffic or the lack of defense during the game!

I arrived home in time to see the fourth quarter and make sure the final score was at least in my favor. Feeling better for the win, I was able to reflect on the good time I had at the VNA Convention while having dinner with my wife.

Congratulations to the Virginia Numismatic Association for putting on a good show. 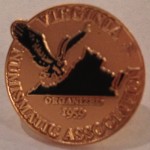 Virginia Numismatic Association pin that I purchased at the table where I also purchased raffle tickets.

1949 Empire State Building Encased Cent announcing it as the “World’s Tallest Building,” which it was in 1949. 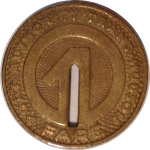 25th Anniversary Middle Atlantic Numismatic Association Medal from 1977. MANA is now defunct but used to be an umbrella organization for the Washington, DC metro area.

This was hanging on the door leaving the convention hall. Based on the last line regarding no more proofs after 1964, I think this was produced in either 1964 or 1965.