Anyone that holds congress in contempt for the dysfunction that plagues the government should love the first two coin-related bills that have been introduced to congress.

The first pitch of political piffle is H.R. 77, the Free Competition in Currency Act of 2013. This folly was introduced by Rep. Paul Broun (R-GA) that takes up where the now retired Ron Paul has left off by introducing a bill “To repeal the legal tender laws, to prohibit taxation on certain coins and bullion, and to repeal superfluous sections related to coinage.” It marks the fourth congressional session that this bill has been introduced and it is likely to meet the same fate as its predecessors.

Although I took this seriously in the past, it appears that Broun did not get the memo that the government needs people to govern and not pontificate. Then again, it is difficult to find anyone of the 535 members of congress who really wants to govern on either side of the aisle, so I expect more of this hooey from this congress. It is unfortunate that he and I share the same undergraduate alma mater. 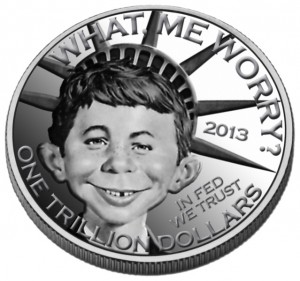 Dallas-based Heritage Auctions, the world’s largest collectibles auctioneer, is asking the public to suggest names, and has even created a proposed design for the coin. Information about naming the coin now is on Heritage’s Facebook pages.

Then again, asking for sanity from this congress may be too much to expect. Rather than responding to fact, Rep. Greg Walden (R-OR), and 19 other “quick” thinkers, introduced H.R. 220, Stop the Coin Act, that will “amend section 5112 of title 31, United States Code, to limit the face value of coins that the Secretary of the Treasury may issue, and for other purposes.”

I love that phrase, “and for other purposes.” Adding it allows congress to add their favorite brand of pork onto any bill.

The problem is that H.R. 77 might make sense if it was not introduced in reaction to the rumored $1 Trillion platinum coin. Aside from the platinum coin idea being a nonsense proposal, the idea did not even come from the administration. The best I can find, it was some blogger’s delusion that problems can be solved without the understanding of basic accounting—essentially, balancing the books when you create money. It is amongst the reasons why the nation is in such debt.

Besides, there does not seem to be anyone around who could afford such a coin. It would make a heck of a collectible!

At another time and in a different context, it might be worth discussing the merits of H.R. 77, which would limit the face value of any coin produced by the U.S. Mint to $200. But for now, both the Department of the Treasury and the Federal Reserve said that it is not going to happen and that neither “… believes that the law can or should be used to facilitate the production of platinum coins for the purpose of avoiding an increase in the debt limit.”

Unfortunately, I have a feeling that the Treasury’s statement will not end the discussion.

Maybe we can change the subject to replacing the paper dollar with a coin!

The Alfred E. Neuman-head Trillion Dollar coin mockup courtesy of Heritage Auctions. And if you think that’s funny, it seems that the mad folks at Mad magazine thought if it first!