POLL: Which Top Modern Do You Want In Your Collection?

Last Friday, the Professional Coin Grading Service released its first annual list of the “PCGS Top 100 Modern U.S. Coins.” This list is their opinion of the best coins that have been struck since 1965. 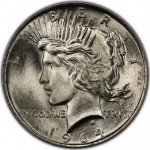 At the top of the list is the 1964-D Peace dollar, the coin I chose for the logo of this blog. Although U.S. Mint records from the time show that 316,076 were struck, they were never placed into circulation and all were allegedly destroyed. Apparently, PCGS believes, as I do, that someone might have purloined at least one coin. They are offering a $10,000 reward just to see and authenticate an example.

Let’s assume for the moment that a 1964-D Peace dollar still exists and you had the money to spend, which of the Top 5 in the PCGS Top 100 Modern U.S. Coins would you like for your collection?

If you have any thoughts on other coins in the PCGS Top 100 Modern U.S. Coins, feel free to leave a comment, below.

If money was not an object and the coin existed, which of the PCGS Top 5 Modern Coins would you buy?