You Should Attend a Local Coin Show

Although I am a proponent of the virtual world and want to see numismatics expand virtually, there is something to be said about going to a local coin show. You know the type, one that is held in a large meeting room at a local hotel where 40-50 tables are setup attended by local dealers and people in the area. Sometimes, it could be more interesting than a larger show.

Earlier today, I had the pleasure of going to the Baltimore Area Numismatic Coalition (BANC) Show at a hotel in Timonium, Maryland. BANC is coalition of the Baltimore Coin Club, Catonsville Coin Club, and the Maryland Token & Medal Society who works together to put on a local quarterly show to bring together people in the Baltimore area and numismatists that may be visiting.

My visit to the BANC Show came about because the Maryland State Numismatic Association (MSNA) held a Board of Directors meeting after the show closed. Since I am Vice President of MSNA, I drove from the metro Washington region to northwest Baltimore a little early to do a little early shopping before the meeting.

Smaller shows do not attract the type of crowd that you will see in a larger venue, like a convention center. Fewer people go to these local shows making it a more relaxed atmosphere. You also see many of the local dealers, the men and (some) women who you want to get to know better because these are the people who can really help you put together your collection. And since the crowds are more relaxed, there is time to talk with those dealers and even catch up with pther collectors you may know.

Another advantage of being at a local show is to be able to talk with people who just come to the show because they have an interest. At this show, I was introduced to a woman who initially had a question about purchasing coins directly from the U.S. Mint at their facilities in the District of Columbia. What then happened is that you get an enthusiastic collector (me) and someone who wants to talk about collecting together and it turned into a wonderful conversation.

While I forgot to ask her name, I did give her the address to this blog. If you are the woman I spoke with, I hope you enjoyed our conversation as much as I did and hope it inspired you to expand your collecting pursuits. Also, we spoke about my write up about negotiating for coins. It was part of my two-part series “How Are Coins Priced.” You can read Part I first then Part II where the section on negotiating is included.

The other purchase was an 1830 Matron Head large cent that looks like it was dipped a long time ago and has re-toned. Although I prefer original surfaces, it is a good looking coin for its age and condition. Since I am passively working on a large cent year set (no varieties), it will fill a hole in that book. Too bad the dealer did not have other large cents to fill the holes since the price was right. But other coins were either too vigorously cleaned or had some corrosion. 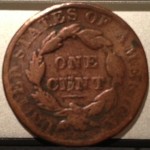 If you want to find a local show, you can find one at the calendar at NumisMaster.com or the Events page at CoinWorld.com. Go forth and enjoy a local show!