Meet Me At The Automat

Growing up in the metropolitan New York area, you can find people who live around all of these famous landmarks but had never visited them. Whether it is visiting the observation deck Empire State Building or the Statue of Liberty, sometimes jaded New Yorkers just never get around to it.

My mother was different. She grew up in Coney Island and was adept at navigating the subway, so she wanted her children to be as wise about our hometown. During breaks from school, especially the winter break, we would take the Long Island Railroad into Penn Station and do something or see something that a tourist would do.

One of the treats about taking this trip was seeing my father in his office in Manhattan. As a youngster, it was cool to see the people who you might have spoken with on the telephone when trying to call my father or someone he had spoken to my mother about. It was also my first look into my future of working in an office, something I tried to resist to no avail.

Part of that visit was lunch at Horn & Hardart’s Automat. The Automat was first opened in Philadelphia in 1902 and New York in 1911 before becoming a real institution in the areas between the cities. First opened in 1902, it was a fast food restaurant that sold meals, beverages, and deserts through coin-operated vending machines. Diners would choose what they wanted to eat, insert the correct change, and lift the window to get your food. The food was wrapped in plastic wrap when I went with my mother but in a era long before I was able to go the food was wrapped using waxed paper.

Behind the machines was a kitchen that refilled the machines and a cashier was in the center of the dining hall to give change. When the Automat first opened, the machines only accepted nickels. Things were a little more expensive in the 1960s, an era before vending machines were able to accept currency, Horn & Hardart used tokens. Remember, this was a time there were almost no dollar coins in circulation, a reported shortage of coins, and when half-dollars stopped circulating because the silver was worth more than their face value.

Tables were set up all around the room like a cafeteria and the decor was what I would later understand to be art deco. 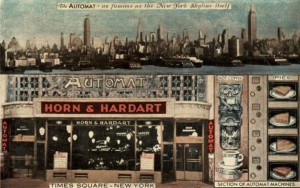 I have a distinct memory of visiting an Automat with my mother the winter break of 1968. That year was the first time my brother went with us and my youngest brother was just a baby, so he stayed with my grandmother. We went to Rockefeller Center and tried to skate on the famous skating rink. There was a man teaching the kids how to skate and I took great joy in watching my brother fall on his butt even though my skating style would not win points at any competition.

A dash to see my father and then we went to the Automat. I remember I had a sandwich and soda. Then, as my mother ran to a quick shopping excursion, I argued with my father about getting a piece of pie. He finally gave in and bought the pie that the three of us shared as we waited for my mother to return. When she did return, packages in hand, my father went back to work and we took the subway downtown to see Macy’s front window. From Macy’s it is a short walk down 34th Street to Penn Station. We went downstairs under Madison Square Garden to board the Long Island Railroad to go home.

This trip down memory lane is courtesy of the Alexandria Coin Club whose annual show was held on February 2. It was a show filled with a nice mix of dealers with varying types of collectibles, I made the trip in the snow flurries to see what I could find. While searching through an exonumia dealer’s box, I found a token that was as irresistible as a youngster picking a sandwich from an Automat vending machine. A wide smile ran across my face as the memories of the food in the machines ran through my memories. There was no way I was leaving the show without an Automat token!

I am not sure what the token is made from, but it is heavier than aluminum. It is 20 mm in diameter, larger than the cent (19.05 mm) and smaller than the nickel (21.21 mm). The front has the distinct Automat logo and the reverse has a child at one of the set of vending machines reaching up for his treat. Around the edge, it says the token commemorates the 70th anniversary of the Automat, which dates the token to 1981. What a great addition to my New York collection. Not only is it different but the memories are priceless.

Along with the Automat token I also found a commemorative medal someone issued for the Statue of Liberty centennial in 1986 and an aluminum souvenir from the Democratic National Convention held July 12-16, 1976 in New York City. When I picked it up I thought it had the look of a Mardi Gras token. When I turned it over, it says it is from Louisiana. The reverse image is that of a pelican since Louisiana’s official nickname is “The Pelican State.” Since the convention was in New York, it is added to my New York collection. Now I need to find something numismatic related from the 2008 Republican National Convention that was held in Madison Square Garden to balance the collection.

By the time I was old enough to become interested in the Automat it was in its decline. In the 1960s saw a decline in their clientele as people started to leave the city to live in the suburbs. Then companies began to open their own cafeterias and buildings reconfigured their lobbies to bring in retail customers including eating establishments. Finally, the city closed a loophole that allowed cafeteria patrons to avoid paying sales taxes and it forced the Automat to raise prices to cover the new tax burden. High labor and food costs drove its regular customers away as quality declined and the restaurants grew seedy. H&H closed half of their locations by 1971. By 1991, the last Automat in New York closed its doors for the last time.