One Page Collection: The Cent

Someone who may be interested in collecting coins may look at the options and think that they are too daunting. Guide books talk about series of dates, mint marks, and varieties. Type books talk about every representative type, even ones that are not affordable to the average collector. Then the folder and album publishers give their interpretation of what a type collection should look like. What the novice to average collector is left with is confusion.

Collecting coins, specifically United States coins does not have to be daunting. You can put together sets of your own design that represents any time or any period. What is great is that once you define your goals, you can have the fun in putting the set together and showing it off to friends and relatives. It is also something that you can develop your own story and include it in your own album. 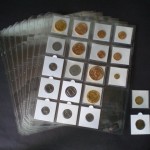 This is why I decided to create the One Page Collection. My one-page is a 20 pocket archival safe page to hold 2×2 holders of some type—for this, I prefer the self-adhesive cardboard holders with mylar windows. These pages can be placed in three-ring binders that can be used to build any number of collections. It is as flexible as your collecting whims can be.

An alternative to the pocket page are Gardmaster Coin Albums. Gardmaster is made by Collector’s Supply House of Paris, Ontario in Canada. Their albums are based on a slide system where the coins are placed into pockets of a strip and the strip is slid into the page keeping the coin in place without the need for an extra holder. The albums are a smaller size with a “Snappy” binder to remove, mix, and match pages. I discovered these albums while putting together a collection of Canadian coins. I then adapted a blank 16-pocket version to create a year set for large cents. You can do an Internet search to find a dealer who sells Gardmaster albums.

For these articles, I will stick with creating a collection using the 20-coin pocket page.

As a general rule, the coins in this collection must gradable at Fine or better and cost under $100. When I create a set of half-dollars and dollars, the limit will have to be raised because of the silver values and the rarity of earlier coins.

Since these are 20-coin sets, many die varieties are ignored to a certain degree. However, design and composition changes are always significant.

The first set I will create are the copper coins. Cents and half-cents were specified in the Coinage Act of 1792 that authorized the creation of the U.S. Mint. Under the new law, the half-cent and its larger cousin the one-cent coin was struck in pure copper from 1793 through 1857.

Consistency in the size of both coins would not be achieved until the introduction of steam-based coining equipment starting in 1836.

Large copper coins were eliminated by the Coinage Act of 1857. Signed into law by President Franklin Pierce February 21, 1857, this act repealed the legal tender status for foreign coins in the United States. It required the Treasury to exchange foreign coins at a market rate set by Treasury. This act discontinued the half-cent and reduced the size of the one-cent coin from 27mm (large cent) to the modern size of 19.05mm (small cent) that is still being used today.

After having problems with the Flying Eagle cent, Longacre designed the Indian Head cent—which is not the image of an Indian but a representation of Libery wearing an Indian-style headdress.

Rounding out our copper collection is the Lincoln cent. Introduced as part of President Theodore Roosevelt’s “pet crime,” the Victor D. Brenner designed coin has been around over 100 years with a periodic change in reverses including the new Shield reverse that began in 2010, 101 years after the coin’s debut with the wheat stalks on the reverse.

Looking at over 230 years of copper coinage there is a lot to choose from to try to make a representative set. The following is what I came up with:

✓ 1840-1857 Braided Hair Half-Cent: A typeset of copper coins has to include a half-cent. To represent I am including a later version of the coin. Not only are these coins readily available but you can purchase a quality example for under $100. Choose one with nice features and a rich chocolate brown color to best represent this series.
✓ 1816-1863 Matron Head Large Cent: For large cents, I am picking two coins. For the early Matron Head cent, I would look at the early dates. They are readily available in better grades at reasonable prices. If you can find a version before 1836, that would represent the pre-steam press era.
✓ 1839-1857 Braided Head large cent: Walk any bourse floor and you will find later large cents that are nicely struck and at reasonable prices. If you want to spend more money you can find a red-brown example, but those with that deep brown color are well struck and wonderful. Having a large cent from this era is a good representation of the pre-small cent times.
✓ 1857-1858 Flying Eagle cent: Forget the lettering varieties. Concentrate on finding a nice coin that would grade Fine or Very Fine for your collection.
✓ 1859 Indian Head cent: This copper-nickel coin with a lauren wreath reverse is a one-coin type.
✓ 1864-1909 Indian Head cent: While there is a copper-nickel version whose reverse has an oak wreath with a shield over the wreath, the bronze version is a new composition with the same reverse. I consider the 1859 copper-nickel covers the composition and the bronze oak wreath reverse covers the change in metals. Coins from the 20th century are very available and affordable. In some cases, if you can spend more than $100 for a coin, you can purchase a nice red or red-brown example.
✓ 1909 VDB Lincoln cent: First year of issue with the “VDB” initials on the reverse is much less expensive than the San Francisco minted coins. For a few extra dollars you can even find a nice red or red-brown coin.
✓ 1909-1958 Lincoln cent: With almost 50 year of coins you can find an affordable example as a bright red coin. Spend a little more money and try for a 1909 cent without the “VDB” initials to get a first year of issue.
✓ 1943 P-D-S Lincoln steel cents: The only coin produced for circulation by the U.S. Mint that did not contain copper (the .999 silver coins contains .001 copper and the .9999 American Buffalo Gold Coin contains .0001 copper). This is worthy of adding one of each to this set.
✓ 1944-1946 Lincoln shotgun cents: Although they are Lincoln cents in every way as the 1942 and earlier cents, these coins were made from the spent shells taken from the training fields around the country. These coins might look a little darker and very available at higher grades for the average collector.
✓ 1959-1981 Lincoln cent with Memorial Reverse: These coins are made from .950 copper with the Lincoln Memorial on the reverse. These are the last copper coins struck for circulation. Adding a 1959 coin would give you the first year or add your birth year.
✓ 1982 Lincoln cent copper and copper-plated zinc coins: In 1982, the U.S. Mint transitioned from copper cents to copper-plated zinc coins. If you do not want to supplement this part with the entire seven-coin collection, then it is not a problem to ignore the lettering size and find an example of a copper and a copper-plated zinc coin. Otherwise, any coin from 1983-2008 Lincoln cent could be used for the copper-plated zinc coin.
✓ 2009 Lincoln Bicentennial cents: This four coin set should not cost more than 50-cents per coin. For a bigger challenge, find proof version that were struck on .950 copper planchets.
✓ 2010-today Lincoln cent with Union Shield reverse: The end of this set pending and further updates. 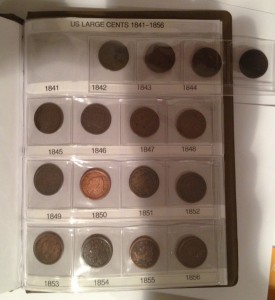 With these 20 coin you now have a set that represents the history of half- and one-cent coins ever struck by the U.S. Mint. While my concentration has been on affordable and easier to find the coins for this collection, you can extend it by looking for more expensive coins or even better grades. One challenge would be to find all of the Lincoln and Indian Head cents as red or red-brown coins. I have seen nice red-brown Flying Eagle coins but were very expensive. And for a little more money, find an 1850s Large cent that is more red-brown than brown.

Another idea is to use the Gardmaster album, buy two 16-coin pages, and expand your collection. As you look through the types, you may want to start with my “Manageable Lincoln Cent Collection” for an idea on expanding your Lincoln cent typeset. From there, you can adapt those concepts to the other cent series.