TR Finally Get His Due 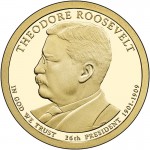 Even though the Presidential $1 Coins have been relegated to collector coins, numismatists should celebrate the release of the Theodore Roosevelt dollar coin.

Theodore “Teddy” Roosevelt, Jr. became the 26th President of the United States on September 14, 1901 following the assassination of William McKinley. Prior to becoming president, Roosevelt was a deputy sheriff in the Dakota Territory, Police Commissioner of New York City, U.S. Civil Service Commissioner, Assistant Secretary of the Navy, and Colonel of the Rough Riders for which he was awarded the Medal of Honor. Roosevelt was elected to the New York State Assembly, Governor of New York, and Vice President of the United State. In fact, his nomination as vice president to run with William McKinley by the Republican Party was to get him out of New York because he was reforming the status quo out of existence.

On September 14, 1901, at 42 years and 322 days of age, Roosevelt became the youngest President when McKinley was assassinated (Kennedy was the youngest elected president when he was inaugurated at 43 years, 236 days). As president he was a trust buster, conservationist, and his slogan of “Speak softly and carry a big stick” set the tone for military and foreign policy that even impacts today’s policies. Roosevelt was the first U.S. citizen and sitting president to win the Nobel Peace Prize for negotiating the 1905 peace treaty ending the Russo-Japanese War. 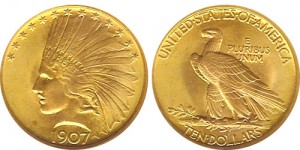 Augustus Saint-Gaudens designed the $10 Indian Head gold eagle that was first released in 1907.

Up until now, the president who is credited with starting the renaissance of American coinage design has not been honored on a United States coin. His image has appeared on coins but as part of an image of Mount Rushmore. You can find Roosevelt on the 1991 Mount Rushmore silver dollar and clad half dollar. Mount Rushmore also appeared on the reverse of the 2006 South Dakota State Quarter.

Interestingly, the 2013 Mount Rushmore National Memorial quarter that will be released later this year will only show Washington and Jefferson during its sculpture. Lincoln and Roosevelt are not part of this image.

Teddy is now featured on the current one-dollar coin. The coin has a portrait Roosevelt facing to his right that even gives the impression of someone looking into the distance. It is fitting for a man who was always looking forward to preservation of America’s ideals and its place as a world leader. 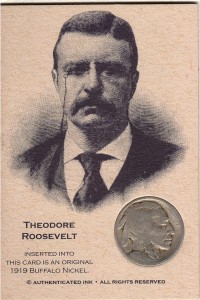 Teddy Roosevelt is my favorite president for many reasons including his view on coin designs. BULLY!