The 2013 American Numismatic Association World’s Fair of Money will be a show I am not likely to forgot. Even though I was only able to attend three days there was a lot to do, a lot to see, and work to be done.

As with every World’s Fair of Money nearly every national organization held their annual meeting during the show. These organizations cover the gamut of interests that fall under the category of numismatics. For me, it was the first time I attended the American Israel Numismatic Association annual meeting. After a few years of conversing with President Mel Wacks via email, we were able to me in person for the first time.

The highlight of the meeting was an illustrated lecture by David Hendin, curator at the American Numismatic Society and author of several books on ancient Jewish coins, on the discoveries made while examining ancient coins. His work is based on examining thousands of coins some as small as 10-15 millimeters in diameter. David presents an interesting case for the continuing study of these coins and how “common knowledge” can be challenged with new evidence.

We also heard from the director of the Holy Land Mint about their plans for future coins and medals.

Because I was at the AINA meeting, I missed the meeting of the Numismatic Bibliomania Society, another organization which I belong. I really wanted to go to their meeting not only because I am a member, because as a blogger and soon-to-be publisher (my book is almost done), I want to work with the community on the best way to move forward with the concept of e-books. Not only should there be more e-books but there should be some way to preserve older books electronically.

Here are some of the stories out of Chicago for the week:

Thursday evening I attended the part of the closed Board of Governors meeting that involved the Technology Committee and the new web infrastructure for the ANA. While I am a proponent of opening as much of the ANA business to the membership at large, I will say that there were discussion about the pending contract for the work that qualified for this discussion to be done in private. The meeting was productive in that the Board has an understanding what was being proposed and provocative in that the dissenting voices will ensure that the project does not fly off the proverbial rails.

At the open Board Meeting on Friday there was a lively discussion on the website, the costs, and the future. This is something I will comment on at another time. However, in a motion by then Vice President Walt Ostromecki, a motion to approve the contract with Riser Media to build the new ANA website and Euclid for their ClearVantage association management software. The motion was passed with a 9-0 voice vote.

During the open forum, a discussion was put forth by then Governor-elect Laura Sperber about the positioning of the auction companies and other non-dealers by the entrance to the bourse floor. Apparently, there has been a lot of angst amongst the dealer community about something referred to as the “star system” used to allow dealers, donors, and others to gain advantages to their position at the shows. As a collector, I agree with Ms. Sperber in that I would rather see the dealers than the auction companies and the other huge booths that are pushed up front.

This year, the World Mint Pavilion was the first set of tables you came to when you entered the bourse floor. In front was the booth for the Holy Land Mint who was showing off their new coins including a lot of gold. Near by were the Royal Australian Mint, the Bank of Russia with their Socci 2014 coins, the Pobjoy Mint, Royal Canadian Mint, and others. I was disappointed that the Royal Mint was not present.

At the end of the aisle was the Bureau of Engraving and Printing and next to them the U.S. Mint. Rather than being apart, the two money manufacturing bureaus under the Department of the Treasury were side-by-side. I was told by someone from the U.S. Mint that this was done on request of both bureaus and that there may be some co-sponsoring of collectibles and events.

It was in this area where I saw United States Treasurer Rosie Rios. Treasurer Rios, whose autograph appears on U.S. currency, is a regular attendee at ANA shows. She is very approachable and an interesting person. You can also tell that Rios still gets a kick out of her celebrity status within the numismatic community and will gladly sign a Federal Reserve Note with her printed signature on it (Series 2009).

The World’s Fair of Money is unique in that it is the center of the numismatic universe for the week. This brings out many different types of dealers of all types of collectibles. Not only were there coins, but there was artwork that was credited to the designers of coins but there were other collectible and ancient artifacts for sale. There were also four different book dealers, three supply dealers, auction companies other than the “official auction house” Stacks-Bowers, and dealers of all types of coins and currency.

One difference I noticed from last year is that silver was more popular than gold. A few dealers said that silver dimes and silver dollars were very popular. On Saturday when the scouts attended in force, the dealers were reporting better than average sales of silver Roosevelt and Mercury dimes.

Friday night I attended the ANA Banquet. I had the pleasure of sitting next to Gerald Kwok from Honolulu, Hawaii. Kwok is a collector of Hawaiian coins and I later found out a recognized expert in that area of numismatics. He also received his 50th anniversary pin for his service to the ANA. I hope he had a good trip back to Hawaii and I look forward to seeing him again next time.

Those who attended the banquet were given a set of three elongated cents, a reproduction menu from a past ANA banquet in Chicago from the 1950s, and a copy of David Lange’s Coin Collecting Boards of the 1930s & 1940s. If you missed the banquet and want a copy for yourself, Dave is selling them at half-off ($20, plus $5 for shipping+handling) at his website.

I spent a lot of time schmoozing rather than buying. Wearing my newly purchased red sports jacket as a representative of the Maryland State Numismatic Association and a new video name tag that captured a lot of attention, I wanted to talk more than buy. I did buy some items, but meeting people and talking about collecting, coins, currency, and the ANA was a lot of fun, too.

Aside from the various free items like elongated coins, the 2013 F.U.N. convention medal, I was able to fill in the some of the holes in my Canadian nickel and dime collection. I found a few tokens including the addition of another New York City Subway token with an error, which I thought was going to be the neat find of this trip until I found something even better.

While flipping through a box of tokens and medals I stumbled on a little medal that is 13 mm in diameter with a hole in it that looks like someone used it as a charm. On the obverse is an image of the Brooklyn Bridge with the legend “Brooklyn Bridge” across the top and dated 1883 when the bridge opened.

What makes this token unusual is that the reverse has the entire The Lord’s Prayer as it occurs in Matthew 6:9-13. The lettering is so small I had to use a 16x loupe to read the text. 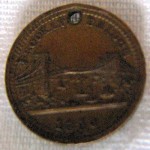 Obverse of the 13 mm Brooklyn Bridge Medal showing an image of the bridge and 1883, the year the bridge opened. 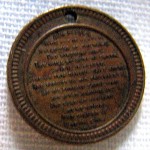 Reverse of the Soley Brooklyn Bridge medal has the text of the Lord’s Prayer.

This mini-medal was produced by George B. Soley, a die sinker who ran a shop on Chestnut Street in Philadelphia. In 1875, Soley bought the first steam-powered press that was used by the U.S. Mint after it was take out of commission. Soley exhibited the press around the country striking medals of his design to the delight of the crowds.

Soley displayed the press at the Centennial Exposition in 1876 and used it to strike commemorative medals. In 1883, it appeared at the opening of the Brooklyn Bridge and the Southern Exposition in Louisville. Soley brought the press to the Columbian Exposition in Chicago in 1893, the Pan American Exposition in Buffalo in 1891, and the 1904 Louisiana Purchase Exposition in St. Louis. During these events, Soley struck 13 mm medals with the something resembling the official logo on one side and The Lord’s Prayer on the other that sold for 25-cents.

The medals Soley produces were made of bronze and holed at the top to use as a charm. There are referenced to gilt and medals that were not plated.

It is difficult to tell whether the medal was struck at the opening of the Brooklyn Bridge or a re-strike made during the Columbian Exposition. According to an article that appeared in the December 12, 1894 edition of The New York Times, the Secret Service asked Soley to stop making the “History of the Philadelphia Mint” medals that he first struck in 1876. It suggests that he was re-striking medals at these various fairs. In either case, the medal is 120 or 130 years old!

The steam press that Soley used was acquired by the Franklin Institute from his widow in 1927. It was reconditioned, motorized and moved to the museum in 1933 to strike aluminum tokens for visitors. On March 23, 2000, the press was moved from the museum to the rotunda to celebrate the 164th anniversary of its first usage by the U.S. Mint. Later that August, the press was part of a special exhibit at the World’s Fair of Money in Philadelphia. Following the show, the Franklin Institute has since loaned the press to the ANA Museum in Colorado Springs where it is displayed at the entrance behind protective glass.

As you could tell from my first day report, I unapologetically had a good time and highly recommend everyone attend the World’s Fair of Money.