CCAC to the U.S. Mint: You can do better

The buzz around the numismatics industry is the article that appeared on the front page of Coin World saying that the Citizens Coinage Advisory Committee rejected the U.S. Mint proposal to use classic coin designs as the basis for a new series of American Eagle Platinum Proof coins.

According to the article, CCAC Chairman Gary Marks commented, “My message is, ‘Let’s do something modern, something new.’” 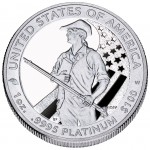 Since 2009, the reverse of the American Eagle platinum proof coins featured the six principles outlined in the preamble of theUnited States Constitution: “To Form a More Perfect Union,” “To Establish Justice,” “To Insure Domestic Tranquility,” “To Provide for the Common Defence,” “To Promote the General Welfare,” and “To Secure the Blessings of Liberty to Ourselves and our Posterity” which will be released in 2014 to end the program. The U.S. Mint is looking for their next program.

Now, The Secretary’s proxy, the management at the U.S. Mint, is proposing a series based on classical coins designs. Using charts showing declining coin sales, they claim that a study shows that “classic Eagle” and “classic coin” designs are popular amongst their customer.

The U.S. Mint may be reading too much into their studies.

First, any sales studies over the last four years have to be taken with a heavy dash of salt. As much as the economy affects their circulating coin programs it also affects the collector coin programs. Since coin collecting is not a necessity, expecting sales to do anything but decline during an economic downturn is naive.

The other problem with coin sales are the coins programs themselves. Rather than give the quarters programs a rest and come up with something different, congress, who decides what the U.S. Mint can do, passed the America’s Beautiful National Parks Quarter Dollar Coin Act of 2008 (Public Law 110-456) to overload our senses with yet another 10-year program. It was justified by noting the seigniorage of the 50 States Quarters program.

This leads to the crux of the problem: the tail wagging this dog are marketeers and bureaucrats rather than collectors and those concerned with how American coinage represents this country.

1928 Peace Dollar is a classic and under-appreciated design

Many of the classic designs are those that came from what author Roger Burdette calls the Renaissance of American Coinage. These are the iconic designs that came as a result of President Theodore Roosevelt’s “pet crime,” where Roosevelt decided to create modern (early 20th century) classic designs to best represent the United States.

A lot of people love the classic designs but on the classic coins. There comes a time to move forward and come up with something different and fresh. Although I have not agreed with some of the CCAC’s decisions, I agree with this decision.

When asked if there should be a theme to the design, CCAC member and medal sculptor Wendy Wastweet said, “No. The artists would be delighted to be free.”

Why not let the U.S. Mint artists have free reign to come up with new designs? They have proven that when allowed to use their talents they can create some of the best designs in the world.

The CCAC has been consistent in tell the U.S. Mint to get out of the way of the artists. In fact, the CCAC Blueprint Report released in February 2011 recommended better working conditions for the U.S. Mint’s artists and engravers while giving them a freer hand in using their talents for new coin designs.

In more than two years, the U.S. Mint has not changed allowing their marketing bureaucracy misread statistics in an attempt to fix a problem they continually demonstrate they have no understanding or insight. The CCAC is right to tell the U.S. Mint to come up with something better. In the process, if the marketing department would stand aside and let the artists be creative, I am reasonably certain these talented individuals will create something far more interesting than any marketeer, bureaucrat, or any member of congress.