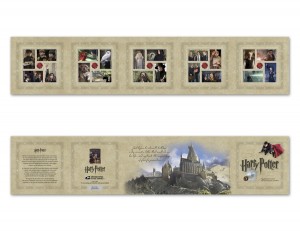 A story appeared in the November 18, 2013 edition of The Washington Post that the hard-core stamp collectors, the ones that will buy the products released by the United States Postal Service, are apoplectic about selection of Harry Potter as a subject for a series of stamps.

The objections are two-fold. First, Harry Potter is not American and neither is the author of the series J.K. Rowling. The other reason is that the Postal Service bypassed the Citizens’ Stamp Advisory Committee (CSAC) to make the deal with the various commercial concerns to issue the 20-stamp tribute to the boy wizard.

Unlike the Citizens Coinage Advisory Committee, the CSAC is not mandated by law. It was established in 1957 “to select subjects of broad national interest for recommendation to the Postmaster General that is both interesting and educational.” Apparently, there has been tension between the Postal Service and the CSAC.

The US Postal Service pays tribute to their own famous error, the Inverted Jenny

Unlike the U.S. Mint, whose products are very heavily regulated, the only regulation the Postal Service must meet is the price of postage. Once the postage rates are set, there are no laws or rules that govern how postage is demonstrated on the piece of mail. In fact, the Postal Service can print any stamp they want to honor any person, animal, object, historical incident, and even their own mistakes as they have by producing a tribute to the Inverted Jenny postage stamp, stamp collecting’s most famous error.

The Postal Service has been an independent agency of the federal government since 1971. Their operating expenses largely come from the sale of postage and the collection of duties for cross-border movement of the mail. Other revenues are generated from the sales of collectibles including special sets, first-day covers, and other collectibles. Interesting items sell well including the Elvis Presley stamps which were the Postal Service’s bestseller.

One area of regulation that has hurt the Postal Service was a law passed in 2005 that forced the agency to pre-pay retirement benefits for the next 75-years in a series of very large lump-sum payments. Their inability to meet the obligation and maintain the 75-year cushion has been widely reported causing the agency to lose significant revenues while trying to adhere to this ridiculous statutory requirement. No other agency or company is required to pre-pay 75-years of retirement benefits.

Knowing that they have to generate new revenues, Postmaster General Patrick R. Donahoe was quoted as saying that the Postal Service “needs to change its focus toward stamps that are more commercial.”

In other words, Donahoe recognizes that the organization he leads has to think differently in order to attract new customers.

The reaction from the philately community is almost the same as I would expect from the numismatic community if this was done by the United States Mint. 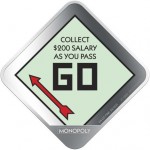 New Zealand Mint produces Monopoly coins for the Island nation of Niue. Did you pass Go?

This is not the case everywhere. Although there have been complaints about the Royal Canadian Mint’s expanded catalog, their products are selling and winning awards. Others complain about the blatant commercialism at the New Zealand Mint for partnering with commercial vendors to issue non-circulating legal tender coins with themes from Star Wars, Monopoly, and Dr. Who? Other than being expensive, is there really anything wrong with these offerings?

Next year, the U.S. Mint will issue a curved coin to honor the National Baseball Hall of Fame. While it will be a round coin, the coin will be concave when looking at its obverse. While the closest thing to “different” the U.S. Mint has produced was the 2009 Ultra High Relief Gold Coin, the sales of the Baseball Hall of Fame Commemorative coins may do well because of the theme and they are different.

If the Baseball Hall of Fame Commemorative coins do sell well, will congress authorize other commemoratives that are not round and flat? Will congress allow the U.S. Mint to produce motorcycle or car-shaped coins? What about coins with commercial themes?

“Harry Potter is not American. It’s foreign, and it’s so blatantly commercial it’s off the charts,” said John Hotchner who was once president of the American Philatelic Society and served on the CSAC for 12 years. Hotchner should be asked about the stamps to commemorate Pixar animation, Disney, and muscle cars. Even though I am a coin collector, I have bought the muscle car commemorative panel along with sheets of motorcycle stamps and a collector book with the stamp of Edgar Allen Poe because I was interested in the theme. 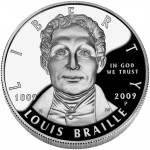 Louis Braille was not American nor did he do his work in America, but congress authorized a commemorative issued in 2009

Both the U.S. Mint and the United States Postal Service rely on generating collector interest to expand their revenue base. Unlike the U.S. Mint, the Postal Service does not have the benefit of bullion to increase its revenues. If both organizations have to be innovative in order to increase revenues, then it should not be a problem. It is a hobby—collect what you like and like what you collect. If you do not like the collectible, do not add it to your collection.

Coin and stamp collectors have to take their heads out of the past. Stamps are losing to email and coins are losing to credit cards. Neither are going away anytime soon, but if there is to be a future both the U.S. Mint and U.S. Postal Service has to be innovative in order to attract new collectors. While the U.S. Mint is handcuffed by the whims of a dysfunctional congress, the Postal Service can capitalize on one of the most popular books and stories of this generation. If it helps promote stamp collecting and allows them to sell more products, then the Postmaster General should be congratulated for a job well done.

Maybe there is something that can be done to add to the catalog of the U.S. Mint in order to generate more interest. Until then, this muggle will be ordering something from the Harry Potter collectibles offered by the Postal Service for his wife who is a Harry Potter fanatic!

What do you think? Weigh in on the discussion in the comments (below).