Counting Down the Top 10: #2 Records have been broken

This past year saw the high-end market get even higher with the auction of significant rarities bringing in significant prices. 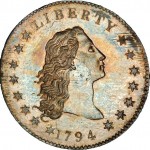 Legend Numismatics’ Laura Sperber took control of the bidding when she invigorated bidding that stalled at $5.5 million when she bit $8,525,000. She called it “shock and awe.” Sperber said that she knew that a $10 million coin would create a huge buzz for the industry and went on to predict that a coin would sell for $25 million before the end of the decade.

At the April Central States Numismatics Society, Heritage Auctions auctioned The George O. Walton Specimen 1913 Liberty Head Nickel. This is the coin that was once thought to be counterfeit. Following the untimely death of Walton following an automobile accident in 1962, his family tried to have the coin authenticated but was thought to be one of the fakes that Walton used to carry with him.

At the 2003 World’s Fair of Money in Baltimore, a conclave of experts examined the coins for hours, debated, and determined that the coin was real. One of those involved in the marathon meeting was Jeff Garrett, the current Vice President of the American Numismatic Association.

Nearly ten years later, the coin was auctioned for the first time. Graded PR63 by PCGS, the coin sold for $3,172,500 to Jeff Garrett and his business partner Larry Lee. 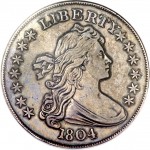 Silver dollar known as “The King of Coins” has sold for more than $3.8 million.

B. Max Mehl wrote in the Dunham Collection catalog of 1941, “In all of numismatics of the entire world, there is not today and there never has been a single coin which was and is the subject of so much romance, interest, comment, and upon which so much has been written and so much talked about and discussed as the United States silver dollar of 1804.”

Maybe the discovery of the 1933 Double Eagle coins may have the 1804 dollar beat, but only one version of that coin is legal to own. There are 15 known coins dated 1804 even though they were struck later. In 1834, eight dollar coins were struck with the 1804 date to include in a special set created as a gift for the King of Siam. The set was presented to the King by President Andrew Jackson during trade missions to the Middle East and Asia.

It is known as “The King of Coins.”

The coin is designated as The Mickley-Hawn-Queller Class I Original 1804 Dollar, graded PR62 by PCGS, sold for $3,877,500 to an anonymous bidder. 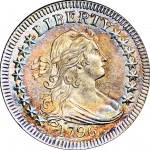 While the records for coins listed above were for dollars, the year saw a record price placed for a quarter dollar. Sold as part of the Eric P. Newman Collection, the 1796 B-2 Quarter Dollar, once owned by “Col.” E.H.R. Green and purchased by Newman in 1931 for $100, the coin sold for $1,527,500. Graded MS67+* by Numismatic Guarantee Corporation is the finest known 1796 quarter.

Not to be outdone, the currency market saw its own record. Although not sold at auction, a $1000 silver certificate from 1891 sold for a record $2.6 million to an anonymous buyer by Stack’s Bowers Galleries. The note features William L. Marcy who served as U.S. Senator and the 11th Governor of New York, and as the U.S. Secretary of War and U.S. Secretary of State.

The note was graded VF25 by Paper Money Guaranty.

The note was sold as part of a collection of more than 85 large-size Silver Certificates that are the finest ever put together. Five notes were sold as part of this transaction. The other 80 went for sale at the 2013 World’s Fair of Money.

Can you imagine what would happen if the Langboard Hoard of 1933 Double Eagles ever make it to the auction block?