It is that time of then when the pundit class of this country puts together their list of the best, worst, or most impactful stories of the year being concluded. There was even an advertisement on satellite radio about an upcoming show that will list the Top 10 moments in music for 2013. After a meeting of the Board of Directors for the Coin Collectors Blog (all three of us: me, myself, and I), the last ten days of the year will count down what we feel are the Top 10 Numismatic-Related Stories of 2013.

In one of the more fun stories of 2013 started following the nomination of Jacob “Jack” Lew to succeed Timothy Geithner as Secretary of the Treasury. One of the “issues” surrounding Lew’s nomination was that his autograph was far from conventional. As one of the co-signers of U.S. currency, collectors became interested in what the new autograph would look like. On one hand there were the series of loops that Lew has passed off as his autograph even while a member of the White House staff. On the other was the alleged promise Lew gave the president to provide a clearer signature for U.S. currency. 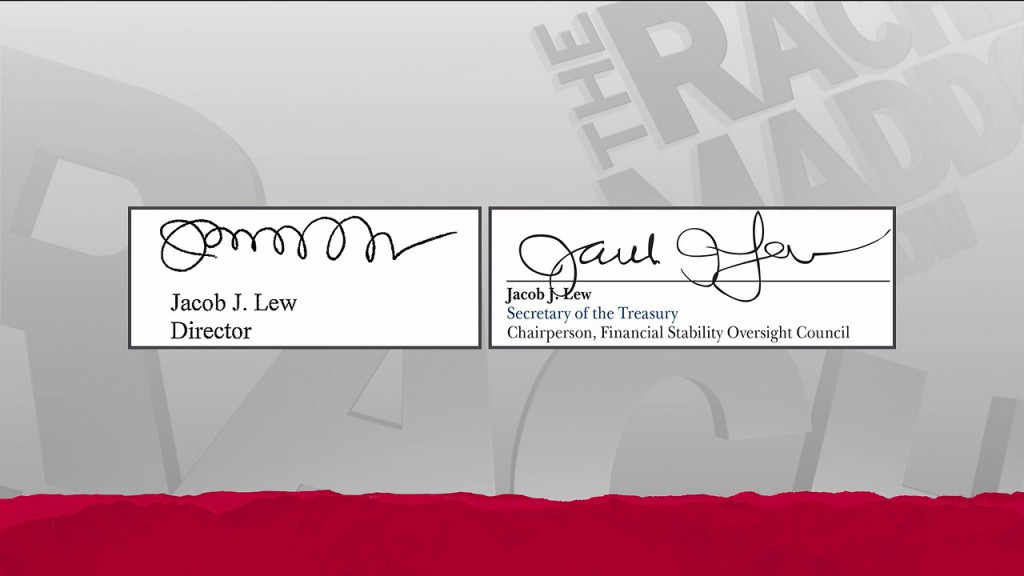 MSNBC on-air comparison of Jack Lew’s autographs: the original Lewpts on the left and what will appear on U.S. currency to the right.

The other signature on U.S. currency is that of Rosa “Rosie” Gumataotao Rios, Treasurer of the United States. Rios was sworn in as Treasurer on August 20, 2009 and has served in that office ever since. Rios’s signature appears with former Secretary of the Treasury Timothy F. Geithner on Series 2009 notes. Ironically, Geithner also changed his signature when he became secretary.

Notes that will include Jack Lew’s signature will appear on all Series 2009-A notes.

Glad we were able to resolve this pressing issue!