There is more than Disney and Universal in Orlando. This week the Florida United Numismatists Is having their annual convention at the Orange County Convention Center. FUN is the first show of the calendar year.

If FUN sets the tone for the coming year, what I saw today was a sign for a good numismatic year. Even arriving later than expected, the bourse floor was a steady buzz throughout the day. There was a lot of activity at both the high end and low end tables.

Low Country Coins out of Charleston, SC has a unique way of displaying their coins for sale.

One thing that makes coming to FUN… well… fun (cannot help the puns!) is that it is in a different area of the country with a different crowd of dealers and collectors. I have found a few dealers who do not go to places like Baltimore where I usually go. Of course the regular large dealers are here, but the more local dealers are nice to meet.

I didn’t buy much today. I spent much of the day schmoozing and looking. Aside from looking at the sale items, I marveled at the items that were not exactly coins. There are quite a few jewelry and other antique items at the show. One thing I noticed was a lot of paper and paper money dealers. While I have seen notaphily and scripophily dealers at other shows, there seems to be quite a few here in Orlando. 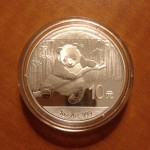 I did buy this 2014 Chinese Silver Panda. I love the Pandas!

Interestingly, the busiest tables were the paper money tables. Usually, there is a lot of activity around the currency junk boxes with the used foreign currency. Here at FUN, I am seeing a solid business of paper money, especially better foreign notes. At a few tables, I saw United States currency collectors buying multiple notes. These were not run of the mill notes. High grade, graded large notes seem to be what the few large purchasers were buying.

In fact, the Heritage Platinum Night Currency auction was held before a full house. While I missed the few colonials I was interested in seeing, I found that the prices realized were well beyond even Heritage’s estimate.

Rather than stand in the back of the room of the currency auction I was not going to bid on, I went to the next room to sit and watch The Adam Mervis Large Cent Collection auction. Aside that I was watching one of the more interesting collection of large cents being broken up, I was enjoying the show being put on by the auctioneers. One of the auctioneers, Bob Merrill, had a great rapport with the audience and really made the auction interesting to watch, even for a non-bidder.

Even though the Heritage auctioneers are good, they seem to miss bids during the furor of the bidding. On more than one occasion with more than one auctioneer, bids were missed that would have significantly jumped the price. Heritage could learn a bit from the classic car and other auctions that are held at large venues and have spotters stand on the floor to help get the attention of the auctioneer. While I have seen this with the big car auctions on television, I have been to estate and bankruptcy auctions in larger places where they use spotters to ensure the bids are noticed.

Dear Heritage: you bring enough people to these auctions, why not add one or two of your people per room to patrol the floor in help the auctioneer. Or why not hire someone to do that at the show. I am sure you can find collectors interested in making a few extra dollars to feed their coin buying habit.

Those following me on Twitter at @coinsblog may have seen many of the pictures I have taken. Eventually, I will post them to Pinterest but I am having connectivity issues. If you want to see the pictures I did take, go to my iCloud Photostream to see all of the pictures, including the ones that did not make it to Twitter. For those who have never experienced an auction, there are two short videos from the large cent auction from where I was sitting.