Going to a coin show in another area of the country is an education on seeing how others do the shows and meeting dealers who do not travel to your area. For me, attending the FUN Convention in Orlando was this type of experience. Yes, there were the usual big name, high volume, and high-end dealers present as they are at any show, but there are other dealers whom I have never met before.

Saturday was spent in three parts. When I arrived at the convention center, I went directly to the exhibits area. As a wannabe exhibitor with two (what I think are) good ideas, I wanted to see how others present their ideas. For the most part, I was a little disappointed in the exhibits. Many were mundane and typical. There were only a few exhibits that really stood out.

This Historically Significant 2-cent Piece by Tom Ulram of PAN

One of my favorites was a display on the two-cents coins that I found out was put together by Tom Uram, President of the Pennsylvania Association of Numismatists. What made the exhibit interesting is that rather than a flat display, he dressed it up using story boards on a backing that was raised from the bottom of the case, and colorful. It looks like Tom understood that the short-attention-span nature of somebody looking at numismatic material would be more attracted to and attractive presentation.

The other exhibit that was clearly about the others was Charmy Harker’s “Penny Potpourri.” Charmy reprised the exhibit from her near sweep at the 2013 World’s Fair of Money to sweep the awards at FUN including Best in Show and People’s Choice. If you have not seen this exhibit, it chronicles the various items made from the little copper one-cent coin. From small tools, decorative items, to dollhouse items, it is amazing what Charmy found. After all, she is known as “The Penny Lady” so it would be natural for her to put this type of exhibit together.

The second part of my day was schmoozing. There is nothing like meeting numismatists of all type on a bourse floor and just talk with them. I spoke with people I know, dealers I did not know until I sat at their table, and with visitors looking at various items wanting more information. I had the most fun at the American Numismatic Association traveling exhibit explaining the history behind the various items of currency that were on display.

Speaking of the ANA traveling exhibit, I was a little disappointed in the presentation of what was exhibited. Aside from not having the currency labeled with information, the case with the errors had just coins placed in the case without description or context. Many of the bland collector exhibits were done better than what the ANA presented.

FUN organizers understand that the idea of having a how is to have fun (pun intended). One exhibit area that I have only seen at FUN is the artists’ area. The artists’ area was in the back of the hall off the center aisle where tables were set in a square that hand artists making jewelry and art from coins. There were a number of artists making modern Hobo Nickels, a bead artist who used coins as part of the beading work, and someone who made large rings with carved coins. 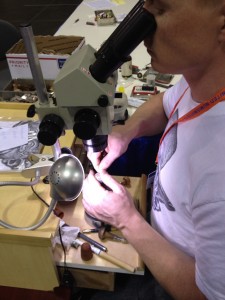 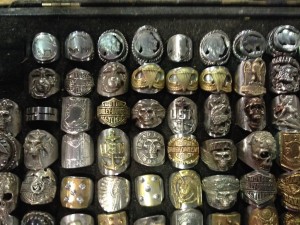 Another fun area was the panning for gold. On the other side of the hall was a large booth set up with troughs that had mud and tiny gold nuggets. It was fun to walk up and watch the kids swirl the pan and find a tiny gold nugget. I do not know how much gold was in that water, but it was a lot of fun giving it a try. No, I did not find a gold nugget!

Of the large shows I have attended, FUN has had the most diverse attendance. There seemed to be more families, women, and minorities than even at the World’s Fair of Money. Another pleasant surprise was the number of women taking the lead with the young numismatists around the bourse floor and many of those YNs being girls. There were also quite a few Hispanic collectors with their YNs buzzing around the floor. Since I do not speak Spanish I could tell they were enjoying themselves just be observing their body language.

Diversity is good in both the hobby and life. No single group has the answers and attracting people with diverse backgrounds and perspectives is good for everyone. I do not know if the organizers of FUN advertise the show in minority communities or in areas that would attract diverse interests, but they should share what they do with the rest of the numismatic community since it is working.

As for my purchases, I was looking for a few silver bullion coins. Of the ones on my personal want list I was able to pick up the 2013 25th Anniversary Canadian Silver Maple Leaf and the 2014 Chinese Panda. I did not find the 2013 all-silver Britannia and I forgot about the 2013 and 2014 Australian Silver Koala. Since I already own the 2013 American Silver Eagle Proof, I should be almost caught up with my silver collection.

In my attempt to find something that I can say “oh… neat,” I did find three items that category. First, to add to my New York City collection is a Type 2 or “Large Y” subway token without the large “Y” punched. This token would have been used from 1970, when the fare was 30-cents, through 1980 for a 50-cents fare. I have seen many mis-punched tokens, but this is the first I have seen without the “Y.” 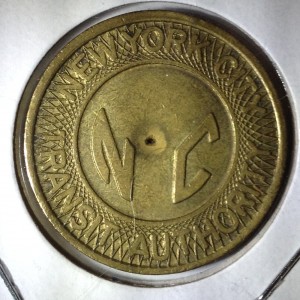 My next “oh… neat” item is a Dad’s root beer bottle cap but with a 1953-D Lincoln cent wedged inside the cap. I do not know if this was done by Dad’s or someone else, but the folding of the cap around the coin looks too perfect to have been done manually. Even if it was done by someone as a good luck piece, it was very interesting. 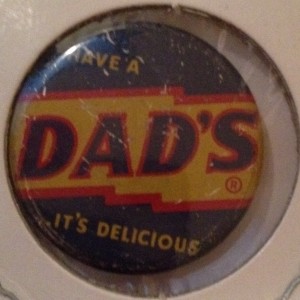 The bottle cap of a Dad’s Root Beer bottle. A 1953-D Lincoln cent is embedded in the reverse! 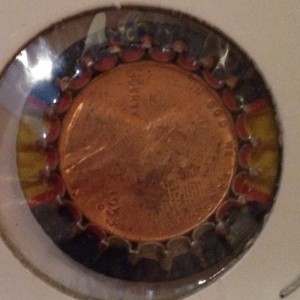 Finally, I found a 1940’s era oil rationing coupon book. Obviously issued during the war, the coupon book limited the holder to up to $25 of home heating oil from the Service Oil Company of Hibbing, Minnesota. Hibbing is in what can be described as northeast Minnesota where it is not exactly warm. As I type this, the Weather Channel is reporting that the temperature in Hibbing a 1F! What makes this coupon book unusual is that it is unused with all the coupons attached from frigid norther Minnesota. It has survived over 60 years in nearly pristine condition. Now that is “oh… neat!”

Back cover of an unused home heating oil coupon book. It was printed for but never issued by Service Oil Company of Hibbing, MN

If you have not been to FUN you should try to go. At least take the family. They can go to a theme park while you hit the bourse floor!

All images can be found here on Photobucket