One of the things I noticed over the last few years are the proliferation of local coin shows in Maryland. Part of the reason is an ambitious dealer finding areas to put on shows and do what it takes to make them successful.

The idea is simple: you have inventory that is not making money for you if it is sitting on the shelf. Rent a hall either in a local hotel or an organization’s building, set up the room so that each dealer has a space, provide a couple of chairs per dealer space, rent the dealer space, have a greeter at the door, and security which can be an off-duty police officer from the area. All that is left is the advertising.

Advertising is a key factor because without it, I would not have stumbled over a coin show this past weekend in Frederick, Maryland. After travelling to Frederick from the closer-in Washington suburbs for other business, I remembered reading that there was a coin show in the area. A quick search using my smartphone helped me find the address and my in-vehicle GPS helped me get there.

When I arrived I walked into the room with about a dozen dealers and a few empty tables. I was not concerned with the empty tables but the ones where dealers sat. Since this was a local show, I knew many of the dealers and spoke with those who were not otherwise busy. Since going to this show was a last minute decision, I did not have my want list with me but I looked around anyway.

While looking at some tokens, I heard one gentleman say that he is getting back into collecting after finding the coins he collected as a child. It is a typical story that many of us can relate. When I heard he was lived near where our local coin club met, I approached him, introduced myself as the coin club’s president, and invited him to our next meeting in March.

Finally, I did have a chance to look at some items. For the times I do not bring my lists, I can fall back on searching the tokens for anything from New York City or anything unusual. During this search, I did find two tokens that I thought were worth buying. The first is a token from the Triborough Bridge and Tunnel Authority (TBTA). For the non-New York readers, the TBTA is an affiliate agency of New York City’s Metropolitan Transportation Authority that manages the bridges and tunnels that have at least one end in Brooklyn or Queen plus the Henry Hudson Bridge which crosses the East River between the Bronx and Manhattan.

The token I found were issued for residents of the Rockaways, Queens for crossing the Cross Bay and Marine Park bridges at a reduced price. The Rockaway Peninsula is off southern Long Island in Queens that is very residential and used to be a very popular summer destination with areas of cabins only used during the summer. The TBTA made the tokens available to residents to help lower their commuting costs. Nowadays, the residents use the EZPass electronic toll collecting system for their discount.

The TBTA issued a few different residential tokens in various areas of the city to provide residents with discounts. While I have some of the others, including the one for Staten Island for use on the Verrazano-Narrows Bridge, this is the first one I found for the Rockaways. After all, these tokens were issued to be used by the residents. Most used the tokens they purchased and did not save them. 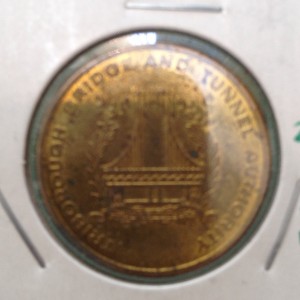 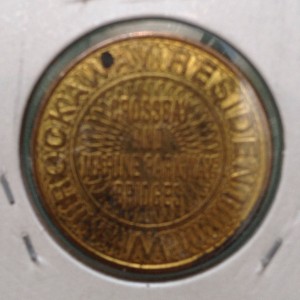 The other token I found was a souvenir from the Empire State Building. While I have a few tokens from the iconic building, this one not only looks newer but is also holed for use as jewelry. This is one of the better looking medals I have found since it look like it was minimally handled. 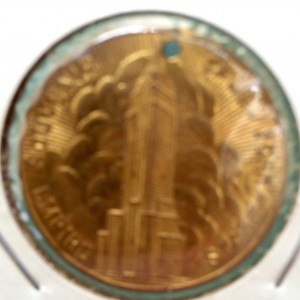 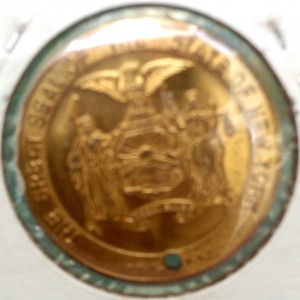 One of the ways to make collecting more fun and personal is to collect exonumia that means something. Being from New York, I once used some of these items not thinking that I would be collecting them years later. Subway tokens were ubiquitous in New York life. I used to use TBTA tokens a lot, especially crossing the Verrazano Bridge for a daily commute to Piscataway. Later, when I moved to New Jersey, I had used tokens for the PATH (Port Authority Trans-Hudson) and was excited to find tokens from its predecessor, Hudson Railway.

Coins are still a lot of fun, but I am really having fun looking for various hometown-related tokens and medals. Aside from being a reminder of my past, it is also a look back on the history of my hometown New York, New York, a city so nice they named it twice!