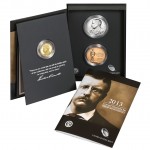 I just received a notice from my credit card issuer that a charge was made when my card was not present. I did not make a charge today and it was for an odd amount. After visiting the credit card company’s website, the name of the entity that charged me was “DIRECT RESPONSE” but located at 801 9TH Street NW, Washington, DC. The address sounded familiar but I could not think of why. After entering it into a search engine I found that it is the address for the United States Mint Headquarters.

After receiving the email, I could not remember what I ordered from the U.S. Mint that they are charging my credit card? I remember I made my annual order of presidential coin covers, but I received those. A visit to the U.S. Mint’s online catalog jarred my memory to remembering that I ordered the 2013 Theodore Roosevelt Coins and Chronicles Set. A quick visit to the webpage noted that the items will be available for shipping on March 18, 2014. I received the notice on March 18, 2014. This means the set should arrive within a week!

I usually do not buy the Coins and Chronicles sets because the subjects do not interest me. However, I have always been a fan of Teddy Roosevelt. My first exposure to Roosevelt was as a youngster growing up on Long Island, I was fortunate to have taken a few field trips to Sagamore Hill, his home in Oyster Bay, New York. My other exposure to TR was visiting the memorial to him at the American Museum of Natural History on Central Park West in Manhattan. Every time I go to the AMNH, which still my favorite museum, I make sure I stop in the TR Memorial. 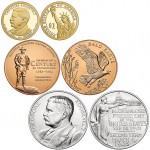 Up until the release of the 2013 Roosevelt dollar, the president who is credited with starting the renaissance of American coinage design has not been honored on a United States coin. His image has appeared on coins but as part of an image of Mount Rushmore. You can find Roosevelt on the 1991 Mount Rushmore silver dollar and clad half dollar. Mount Rushmore also appeared on the reverse of the 2006 South Dakota State Quarter. Roosevelt’s image does not appear on the 2013 Mount Rushmore quarter.

If you want to learn more about our 26th president and have the time to read three books that were writing in Victorian-era prose, I would highly recommend the three books by Edmund Morris: The Rise of Theodore Roosevelt that covers his life up until his presidency, Theodore Rex about his presidency, and Colonel Roosevelt that discusses his life after he leaves office in 1909. For those who want a little lighter reading and in one book, I recommend Mornings on Horseback by David McCullough.

I have not yet read The Bully Pulpit by Doris Kearns Goodwin that covers the era of Roosevelt and his successor, William Howard Taft. Between Roosevelt and Taft, it was a time of bridging the Victorian era with the industrial age. It was a very interesting and important time in U.S. history. 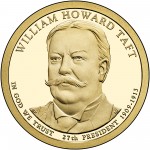 Taft is another president that does not get the respect he deserves. Aside from pulling the country out of the recession of 1909, Taft was the only president to have been appointed to the United States Supreme Court. He was the 10th Chief Justice serving from 1921 through 1930. For numismatists, Taft was responsible for convincing congress to pass the appropriate legislation that formed the Commission of Fine Arts. Although Roosevelt created the CFA by executive order, Taft felt that was not constitutional. He asked congress to codify the CFA’s existence into law.

For those in need of a good trivia question, Taft was the last president with facial hair, sporting a very cool looking handle-bar mustache.