Susie B makes my change hunting

Earlier this week I drove up north to Long Island to spend holidays with relatives. Taking these rides reminds me that we do not live forever. While the family has been expanded with children, the number of relatives at the seder is lower than it was just 10 years ago and these trips are punctuated with trips to the cemetery. 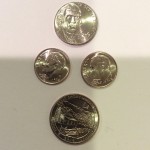 One advantage of making this trip is that I get to visit different establishments where paying cash returns change that can have some surprises. Sometimes, I take a close look at what the cashier returns to me. Other times, I just glance at the little metal disks to make sure that it is the correct amount before it is dropped in my pocket.

During one of our necessary stops, I was handed some change and noticed that the dimes looked a bit shinier than usual. Quickly zeroing in on the date I saw the “2014” date. After searching all over the Washington, D.C. area for 2014 coins, I find my first somewhere on the road in New Jersey.

Later that evening I emptied my pocket to see what else I could find. In addition to the dime, there was a 2014-P nickel and a surprise.

In 1979, the Susan B. Anthony dollar was released to much fanfare. It was the first “small” dollar coin and was the first U.S. coin to feature a real woman. Prior to the famed suffragette being featured on a coin, the image was that of Lady Liberty in some form. Even the Indian Head cent was not an Indian but Liberty in a native headdress.

But those of us who watch the experiment first hand soon discovered that the coin was too close in size with a quarter. In fact, the color, and reeded edges saw the Susie B. consistently being mistaken for quarters.

Almost as instantly as they appeared, the coins disappeared. Even as the public was willing to try the new coins, the rejection was almost as quick. After three years of production, the coins found a home in Las Vegas where they were used in slot machines. So many coins went unused following their last production in 1981 that was mainly for collectors, production picked up in 1999 after orders for additional coins were made from the vending machine and Las Vegas gaming industry. 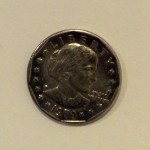 The ’79 Susie B. that I received in change that was probably mistaken for a quarter.

Apparently, the mistakes of the past continue into 2014 since a 1979-P Susan B. Anthony dollar was mixed in with my change. Although some vending machines will provide change in dollar coins and could be loaded with Susie B. dollars, I did not use a machine.

I suspect that someone who previously visited that roadside oasis (how’s that for a description of a rest stop along the New Jersey Turnpike), used one of the vending machines, then spent the dollar thinking it was a quarter. The coin sat in the tray in the cash register until it was time to provide change for my purchase. The cashier, not paying attention to what she was doing, counted the requisite number of coins from the quarter section of the draw. In a rush, I just saw what was the right size coin and dropped it into my pocket on my way back out of the building.

Starting in 2000, the dollar was changed to not only honor Sacagawea but magnesium was added to the metal mix to give the coins a golden color. The color and making the edge smooth made it less possible that the coin would be mistaken for a quarter. Unfortunately, the memory of the failed Susie B. lingers among a significant segment of the population in a way that kept a similar push with the modern Presidential dollars from being successful.

But in this case, finding a Susan B. Anthony dollar made my day!