Cook Islands will be issuing a coin with an embedded thermometer to commemorate the 270th anniversary of the death of Anders Celsius. While his name does sound familiar, the results of his work is known in most of the world except for the daily lives of most Americans.

Celsius was a Swedish physicist, mathematician and a professor of astronomy at Uppsala University. As one of Sweden’s premier scientists of his day, Celsius traveled extensively to research ways to measure degrees from the poles in order to improve mapping and navigation. He believed that by studying the stars we could learn more about the composition of the earth and its origins, something we are still doing today.

The research he is most known for was as the first scientist to experiment with temperature in order to define a definitive scale to be used by all scientists as the basis for their experiments. In 1742, Celsius published the paper Observations of two persistent degrees on a thermometer where he defined 100 as the freezing point of water and 0 as its boiling point with a scale of units in between. He called his scale “centigrade” derived from the Latin for “hundred steps.”

Independently, physicist Jean-Pierre Christin of France developed a similar scale with 0 as the freezing point of water and 100 as its boiling point. In 1743, Christin commissioned the building of the “Thermometer of Lyon,” a mercury thermometer based on his research.

Celsius died in 1744 at the age of 42 from tuberculosis. A year after his death, colleague Carolus Linneaus, a botanist interested in the effects of temperature on growing plants, reversed Celsius’ scale and improved on the design for the thermometer. In a paper published in 1745, Linneaus first used the Celsius to describe the temperature scale. He later convinced the Royal Swedish Academy of Sciences to change the name of the scale to Celsius in memory of his late colleague.

To honor Celsius, the Cook Islands hired Coin Invest Trust of Balzers, Liechtenstein to design and strike a coin to honor Andres Celsius. The coin with a 5 Dollar face value will 50mm in diameter and proof struck using one troy ounce of .925 silver. Mintage will be limited to 1744 pieces. 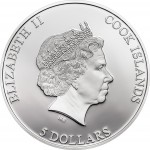 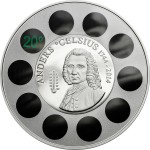 Reverse of the 2014 Cook Island Anders Celsius NCLT features a portrait of Celsius surrounded by a working thermometer.

No announcement has been made as to when it will be available and the purchase price.

Given my resistance to gimmicks on coins (with my own admitted hypocrisy), there is still something compelling about the proposed design for this non-circulating legal tender (NCLT) coin. I will wait to see how much the coin will cost before making a commitment one way or the other.

An image of how the 2014 Cook Island Anders Celsius NCLT coin presentation case.

An image of how the 2014 Cook Island Anders Celsius NCLT coin will look in its presentation case.

An image of how the 2014 Cook Island Anders Celsius NCLT coin will look in its holder.