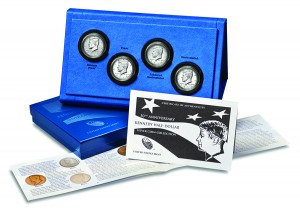 If you are like me and forgot, the U.S. Mint began to take orders for the 50th Anniversary Kennedy 2014 Half-Dollar Silver Coin Collection yesterday, October 28. The set consists of four 90-percent silver coins from each of the branch mints using the original design of the Kennedy half-dollar as designed by Gilroy Roberts. For those who are not regular collectors of these coins, the design is known as the “accented hair” variety with deeper highlights of the slain president’s hair. The set will be in a special faux leather folder enclosed in a specially designed box.

What is even more impressive is that the new computer ordering system withstood the challenge of a new product offering. In years past, the computer ordering for popular U.S. Mint products had sent the computer system into fits while trying to keep up with the requests. By all accounts, the computer system not only processed every order in a timely manner, but the U.S. Mint reports that the site was working at a rate of 14 orders per second and that the average peaked at 24.9 orders per second.

For those of us who suffered through the pain of ordering of products line the American Eagle 25th Anniversary Silver Coin Set, the performance of the new website is a welcome change.

While the new website looks good and sports more modern functionality, it seems to perform well and works more smoothly than the old site. Unfortunately, I am not sure that I like the way the site is organized. My primary complaint is that the site is designed as a shopping site that seems to have buried the information about the coin programs. There should be a better balance between their mission as the government’s manufacturer of coins and the sales of those coins.

After years of frustration with the U.S. Mint, it looks like they are really working to serve its clientele including the Federal Reserve, which it is required to produce coins for by law. Maybe it has served the country well by having a professional run the U.S. Mint rather than a politician.