No Internet sales tax for you 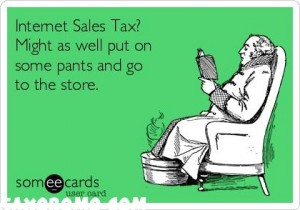 Although the numismatics industry generates millions of dollars per year, it is dominated by small businesses. You can see this by going to any show and with the exception of the major auction and bullion companies, the vast majority of the dealers you see on the bourse floor are small businesses. Numismatics may be one of the few national industries that you can meet the owner just by walking up to their table at a show.

Numismatics is not alone as being dominated by small businesses but it is the only industry that generates notice because of the prices for its high end merchandise. Face it, some people cannot comprehend how someone can pay over $10 million for a one dollar coin. Forget the fact that the coin may be amongst the first dollars produced by the U.S. Mint, it is still just a one dollar coin.

We keep hearing that small businesses are the backbone of the economy and that Main Street does not function without small businesses. Small businesses have been using the modern equivalence of mail order in order to expand beyond Main Street to reach customers where ever they are. In the spirit of Aaron Montgomery Ward and Richard Warren Sears whose mail order catalog businesses are the legends of business history, modern entrepreneurs have been leveraged the Internet to sell goods and services to a worldwide public.

Even though the small business is the backbone of the economy, their existence is constantly under attack. Aside from over regulation and complicated tax requirements, states want these small businesses to now collect sales taxes from the customers in the states that require sales taxes. This is not limited to sales by catalogs and the telephone. Sales made using the Internet would be subject to the customer’s sales tax.

This also does not count the states that collect sales taxes for the sale of coins but not the sale of bullion or for coins over a certain threshold. A small business now has to add additional resources to comply with the laws of all 50 states even though they are present in only one.

The Senate passed the Marketplace Fairness Act (S. 734) with objection from the senators representing states that do not have sales tax laws. In the House, Judiciary Committee Chairman Bob Goodlatte (R-VA) has been a vocal critic of the bill. Goodlatte has said that the bill is written too broadly and could damage online commerce.

Although the bill was called the Internet sales tax bill, the bill was written in such a way to require all interstate sales to be subject to the collection of sales taxes. Collecting of sales tax would include everything from services to advice as well as digital downloads including music, smartphone apps, and streaming music services.

On Monday, all small businesses breathed a sigh of relief when a spokesman for Speaker of the House John Boehner (R-OH) said:

The speaker has made clear in the past he has significant concerns about the bill, and it won’t move forward this year. The Judiciary Committee continues to examine the measure and the broader issue. In the meantime, the House and Senate should work together to extend the moratorium on internet taxation without further delay.

This does not mean the Senate has given up. Sen. Mike Enzi (R-WY) has attached the wording of the Marketplace Fairness Act to a bill that passed the House to extend a moratorium on taxing Internet access. Although this has some support from Sen. Orin Hatch (R-UT), ranking member on the Senate Finance Committee, Chairman Ron Wyden (D-OR) is against the bill since Oregon is one of the states that does not have sales tax laws.

With the Democrats facing the loss of control of the Senate in January, it may be unlikely that the Democratic chairman of a committee would give a Republican something he wants during a lame duck session. Wyden will block the measure and work with Majority Leader Harry Reid (D-NV) to promote their agenda before they lose control.