March of Dimes commemorative should be a COTY candidate 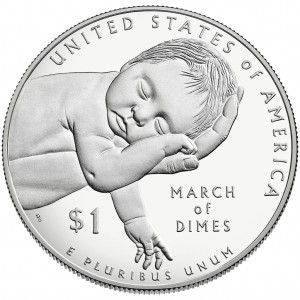 There are few times when the design of a commemorative coin is so impressive that it inspires me to own one. This year, the coin to own is the 2015 March of Dimes Silver Dollar. Issued to commemorate the 75 anniversary of their work to prevent disease and disability in our children, the reverse is designed in a way to bring the emotion of their work to a 38mm silver disk.

Founded as the National Foundation for Infantile Paralysis by President Franklin D. Roosevelt on January 3, 1938 as a response to the polio epidemic, the group brought together volunteers and scientists to eradicate polio. Basil O’Connor, an attorney and friend to Roosevelt, helped establish the organization and served as its first president. His first task was to organize the volunteers and raise money to support research.

The breakthrough in eradicating polio came in 1952 when Dr. Jonas Salk announced that his team developed a vaccination. Following a trial that involved 1.8 million children in 1954, the Salk vaccine was deemed safe and effective. In 1955 the vaccine was approved for wide use.

Even though the vaccine would save lives, there was a problem with children who were not being as cooperative as they should be. Everyone knew that the vaccine would benefit everyone, but parents did find it difficult to deal with screaming children. This is where Dr. Albert Sabin stepped in to lead an effort to find an oral vaccine. The result was a liquid that would be poured on a sugar cube and eaten by the child. This version of the vaccine required two doses a year apart, but very few children complained—at least amongst my contemporaries.

The name “March of Dimes” was coined by Eddie Cantor who was inspired to support a nationwide fundraising campaign the week preceding President Roosevelt’s birthday on January 29, 1938. One of the fundraisers was the selling of lapel pins that sold for 10-cents each. Others would donate 10-cents out of proceeds to the fundraiser. When the fundraisers ended, the organizers counted $85,000 in 10-cent donations. Since then, their annual fundraising efforts were called the March of Dimes.

The obverse of the commemorative dollar honors the impact of President Franklin D. Roosevelt and Dr. Jonas Salk on the March of Dimes.

But the March of Dimes is and always has been about infant health. Working to promote healthy pregnancies and preventing pre-mature births, there is nothing that is more important to their mission but the birth of a healthy child. What better to represent the care of a healthy infant than the image of the reverse of this commemorative coin. Designed and engraved by Don Everhart, the reverse shows a sleeping infant cuddled in its parent’s hand. It is a simple yet powerful image that is very compelling. 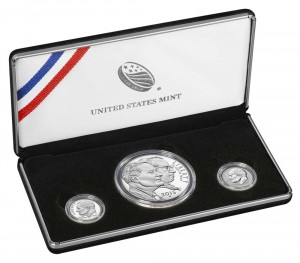